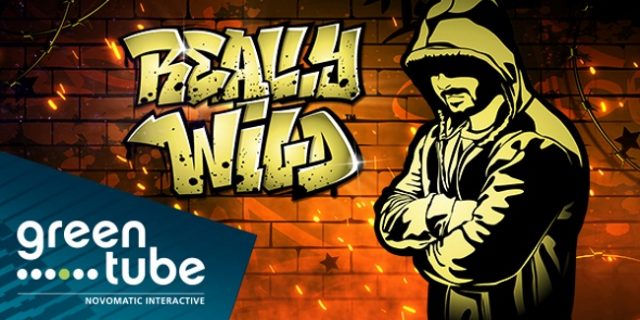 You just know that you’re in for a magnificent slots adventure when a game, by its very name, announces itself to be Really Wild! Greentube; a gaming software subsidiary of Austria’s Novomatic AG; has just released its latest innovation in slot development, and not even a month after having released another big hit, namely Jinx Match 3. According to an official introductory press release issued by Greentube, its Really Wild slot will introduce players to the law of the streets.

The game features a total of 7 paylines. But don’t let its apparent simplicity fool you into thinking it to being your meek and mild friend, because Really Wild is definitely not for the faint of heart. Its all about survival of the fittest, life on the street and developing a true winner’s mentality; for which there are plenty of excellent opportunities, by the way!

Be Street Smart And Really Wild

Four reels and a host of fruity symbols complete the nifty streetwise slot. Lemons, grapes, cherries, watermelons and more spin effortlessly on the reels, tallying up regular wins as they tumble along.

Befittingly, the hooded hoodlum figure is the special Scatter symbol. Befriending the hoodlum is advisable as it is the dark and mysteriously hooded figure that has the power of the free spins bonus game in his hands. Three or more anywhere in scattered fashion on the reels will activate at least 10 free spins. And to those who manage to bring 4 hoodlums into view during a single spin, the reward is a stellar 20 free spins.

According to Greentube’s official review release, those players lucky enough to lock an entire row of hoodlums into place will be treated to massive and additional rewards the likes of which has not yet been experienced in the ether.

One Of Many Grand Ideas

Greentube has been going at the development game for quite some time and the developer has come up with quite a number of hit-creations. Some of its top popular video slots include titles like Tidal Riches, Ancient Goddess, The Great Gambini’s Night Magic and Enchanted Fortunes Linked Jackpot. These are but to name some of the games recently released by Greentube. The developer apparently also has many more to come up its creative sleeves.

Really Wild puts a romantic spin on what is generally considered to be the “wrong side of town” and can be enjoyed on desktop or mobile.

Ready for wild WINS? Play top jackpot slots online and see if YOU can strike it RICH!