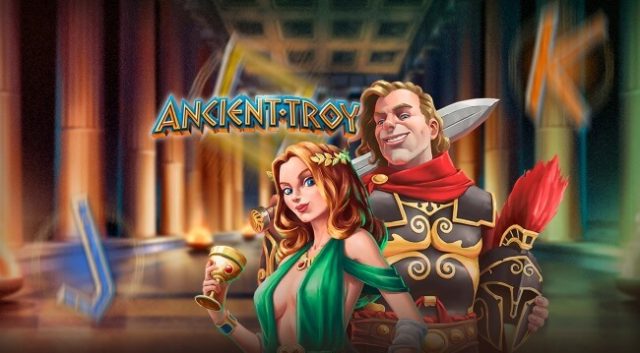 It may not be a hot and steamy Brad Pitt but it is Endorphina, and that’s a close second in terms of sheer pleasure, after all. The top-class Prague developer has released a new slot and its hot off the production line and even hotter as far as big-win potential goes. Ancient Troy is also hot off the heels of Minotaurus, and this time round the battlefields of Greece is where the action takes place. The game is based on the legend of Troy, with Achilles and Hector having had to fight each other after younger brother Paris fell in love with none other than Helen of Troy.

But in the words of a wise Hector, if there is any cause worthy of going to war for, then let it be love. And so Endorphina did; at least for the love of slots, and to our minds, that’s just about as true as love gets. Ancient Troy is fully compatible with desktop as well as mobile systems, thanks to the game having been developed in full HTML5.

Special Features For A Special Quest

The city of Troy makes for the perfect backdrop to the slot, and images are depicted in a cartoon-like fashion, reminiscent of the adventures of Asterix and Obelix.  But unlike A&O, this is serious business; after all, it’s a fight for the hand of the fair Helen.

The slot is played on a standard 5×3 grid, and is complemented by 25 adjustable paylines. A trusty Steed, battle gear and playing cards make up the 15-in-view symbol spectrum. The playing cards are at the lower end of value chain, and the legendary warriors pay the most. The warriors include Achilles, Helen, Hector and of course, Paris.

A decidedly nice touch is the fact that the legendary Trojan horse, the one that was used to enter the city’s walls without anyone the wiser, is the game’s wild symbol. The horse symbol has the ability to replace any standard symbol for a win. The scatter is the Troy symbol and is the symbol that triggers the free spins bonus round.

Troy For The Jackpot

The Troy scatter symbol is also the one symbol really capable of triggering a jackpot win. 5 in a row trigger a 5,000 bet multiplier. Now that’s what we call a win fit for a real warrior. The game also features a special gamble feature that may be used to try and double up on one’s winnings. The gamble feature is available after every win and the aim is to try and pick a card that is of a higher value than of that selected by the dealer.

Play for a major JACKPOT win! Enjoy the very best ONLINE SLOTS at your leisure.