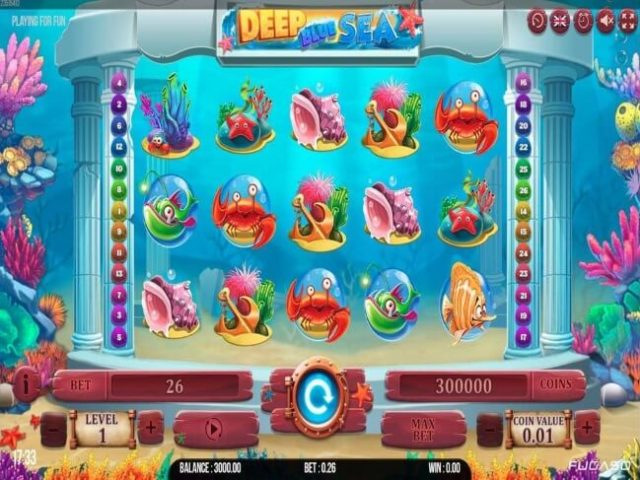 Veteran game provider Fugaso has put the focus on life below the waves, with the release of its new online slot, Deep Blue Sea. It offers players an array of aquatic creatures, an interesting number of paylines, and a few bonus features.

The casino game has been met with positive responses, with some reviewers drawing attention to its lines and bonus elements. The main game takes place against a backdrop of ancient, sunken pillars, and with controls that appear to be made from the wood of shipwrecks. A jackpot of 500x the bet is what awaits players who dive into the Deep Blue Sea.

Symbols to Reel In

The theme spreads as far as the reels, where there is no mistaking what the symbols are, however cartoonish their grinning faces may be. The above-mentioned jackpot is won by landing 5 sharks on a payline.

In addition to awarding the big prize, the shark also is Wild, and can substitute for every symbol but the treasure chest. Other images on the Deep Blue Sea reels include a striped orange fish, a red crab, a clump of seaweed, a happy starfish, a pink conch, a turtle, and an anglerfish.

The 26 paylines, a number not often seen on slots, running across the 5 reels are fixed. The value of the coins and the bet level, however, can be chosen from the available options. Depending on players’ choices, the game can be played for as little as 0.26 per spin. The 260.00 maximum bet is likely to be appreciated by high-rolling players.

The treasure chest bonus symbol is linked to 2 different features. The first is triggered when only 2 chests land on the reels.

They trigger a Re-Spin feature, during which as many as 3 symbols will be chosen randomly to be Walking Wilds. An additional Re-Spin is granted for every win that lands, or if additional Walking Wilds are chosen.

If 3 or more treasure chests land on the Deep Blue Sea reels, they will trigger a Free Spins round. During it, 3 symbols will be chosen randomly as additional Wilds. Also, symbols can form winning combinations from left to right, and from right to left.

Founded in Russia in 2001, Fugaso, or Future Gaming Solutions, develops online casino slots as well as games tailor-made for clients. The provider’s software is compatible with various platforms, including computer, and Android, iOS, and other mobile devices.

Furthermore, the software used to build Deep Blue Sea and other games is licensed by the Malta Gaming Authority, the UK Gambling Commission and the Government of Curacao, so it is safe and fair.

Make a splash with online slots! Get spinning to get WINNING online!