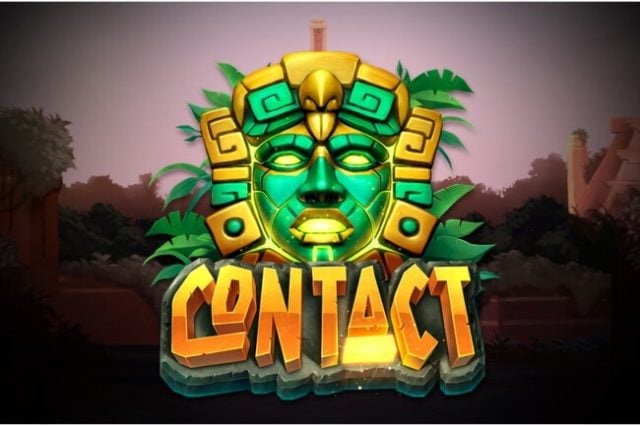 Play’n GO’s latest slot is real show-off. Contact, an online video slot themed around the culture and conventions of the ancient Mayans, doesn’t feature the traditional paylines system. Instead, symbols are added onto clusters, and as winning combinations are formed, the remaining symbols come cascading down until such time as no new groupings are formed by the add-ons.

Every time 5 matching symbols appear together in a cluster, a win is registered. A 5 x 7 grid makes it all possible, and the cascading reels have been designed to work on the same model that was implemented in the developer’s Viking Runecraft and Gemix.

Ultimately, in order to determine the value of the win, symbol values are multiplied by the total number that appear in a group.

Multipliers play a decided role too. 2, 4 and 6 multiplier rounds provide a much-needed boost to wins and these work together with the game’s Bonus Round and Super Bonus Round. A winning cluster that has formed from the top row to the bottom row activates the slot’s Bonus Round. Here, special features come into play, including the Symbol Upgrades, the Block Destroyer, and even the Extra Free Spin feature.

A real treat is when the entire grid is filled during the Bonus Round, as this is when a 25x bet multiplier is applied as a reward to any remaining spins in the feature.

As for the Super Bonus Round, this is activated in the event that the entire grid is filled with winning symbols. Several winning features act as unique awards for when this happens and these are awarded completely at random. Symbol upgrades, extra free spins, and the Block Destroyer function all come into play here too.

Whenever a Block Destroyer appears during the Super Bonus Round, a max-multiplier of 30x is applied.

As for the theme and how the game was put together in terms of graphics, the symbols really do impress. These are all themed around the civilisation of ancient Mayan people, and include masks and various etchings. The masks represent the higher-paying icons and the etchings carry a more conservative reward.

Contact features all of the usual suspects too. The Autoplay function will ensure that new rounds are automatically played for a set number of rounds. The bet value may be toggled too.

Contact is available for desktop and mobile, and looks set to be yet another smash slots hit from Play’n GO.

Get those reels spinning and get WINNING! Play online slots for real money NOW