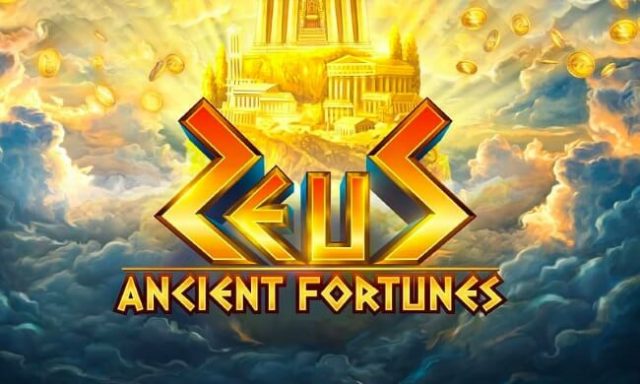 Popular Greek mythology once again takes centre stage in an online slot and this time round, it’s something to really look forward to as Ancient Fortunes: Zeus is the result of a collaboration between Microgaming and contracted partner and independent developer Triple Edge Studios. Triple Edge Studios are the creators of popular Microgaming slots Book of Oz and Bookie of Slots.

Mount Olympus is transformed into the ultimate winning destination and players are transported to an era of godly royalty and a place where miracles happen as everyday occurrences to those living in the famous god of thunder’s kingdom. Thanks to the well-rounded theme and general presentation of elements of culture and folklore, it’s not at all hard to imagine one’s self immersed in a time but imagined but majestically real.

Ancient Fortunes: Zeus features 5 reels and 10 paylines. Simple and extravagant has been combined with a popular theme, and it all leads to just about one of the most exciting playing sessions available on the Internet.

Artfully And Expertly Put Together

King Zeus doubles up as the wild symbol and his famously feared lightning bolts are the scatters. Already during the base game, Triple Edge’s commitment towards creating titles that are nothing but an artful notch above the rest becomes glaringly apparent. Colossal stone blocks come crashing down onto the reels, each painstakingly created to display a pantheon of gods by means of their illustrated artwork.

The blocks create the wall that forms the basis for the slot’s Rolling Reels feature and this is a playing feel where many wins are to be made. The backdrop behind the reels features a city of pure gold fit for true godly royals and their subjects and every time a winning combination is a made, the blocked symbols will shatter with great ado and reveal a glimpse of the city of gold in the background.

No End To The Excitement

Games Publisher David Reynolds (Microgaming) says it well when he describes the slot as having been expertly crafted by Triple Edge Studios; a game with an electrifying edge to it. Ancient Fortunes: Zeus is now live and available for play on desktop and mobile.

Blazing slots entertainment and the HOTTEST WINS are waiting for you online! Play today.