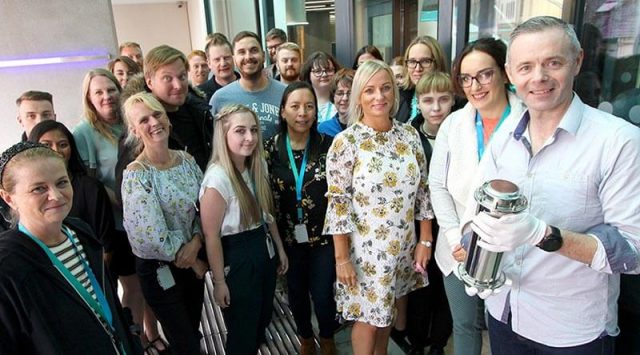 Microgaming has marked its first anniversary at its Isle of Man headquarters by burying a time capsule. Chief Executive Officer, CEO, John Coleman celebrated the milestone together with his staff on campus on the 1st of August by putting a time capsule underneath the entrance of the building!

The time capsule will be opened up in 30 years, and has been filled with a variety of quirky mementos that were curated by staff suggestions to mark the company’s most significant events.

The capsule has been vacuum-sealed and has undergone special treatment in order to prevent any of the items tarnishing. It contains photos highlighting different happenings, a PlayItForward volunteer’s shirt, and local and international articles collected over the past 12 months. The batch includes the article about Sixty Two getting named one of the coolest offices to work in in 2017.

Built With a Focus on Staff

The second office on the Isle of Man was constructed with its staff in mind, and allows for the expansion of the company. More than 300 employees now work in the five-storey office, with this number up from the 231 it started with since it opened on the 31st of July last year.

In order to provide the best possible working environment for employees, there are hot desks, work booths, standing desks, and breakout areas on each floor. Staff are also encouraged to take time away from their desks, and there is a communal area located on the fourth floor. It features a pool table, a dartboard, a table tennis table, a poker table, and a library. A fully equipped gym and treatment room is also housed on site, and a canteen and coffee shop make refueling easy. Rooftop gardens provide incredible panoramic island views, and these can be enjoyed a little bit more fully thanks to the periscope at reception.

Coleman spoke of how important marking the first year at Sixty Two was. He stated that the time capsule was created in order to record a moment, with the campus, staff, and culture all being documented for posterity. He ended off by saying that this moment was one that could also serve as a reminder to their future selves of the unique heritage that they were a part of, and the individuals who had insured that the building was much more than just a place to work.