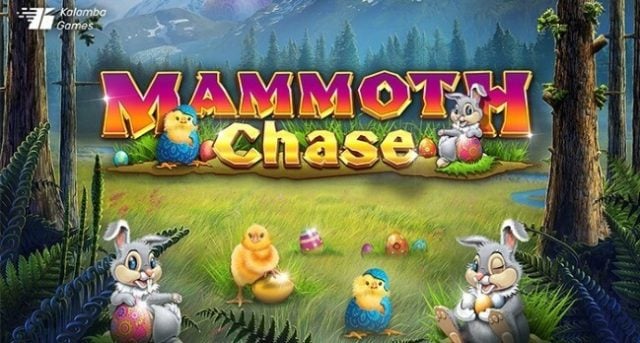 Christmas, Easter and Thanksgiving offer rare opportunities to reflect and spend time with family. But that doesn’t mean that boredom should be allowed anywhere near the equation. Thanks to top casino software developers, the holidays offer exciting new games to look forward to, as development houses often publish online slots that are tailor made for the season.

The latest release by software giant Kalamba Games is exactly that, and right in time for Easter too. Kalamba has just released a very special edition of one of their most popular slots to date: a masterful re-work of Mammoth Chase; Mammoth Chase Easter Edition. And if bunnies and chicks and chocolate eggs make your heart pound a little bit faster, then it’s time to get those reels spinning.

Being a re-work of Mammoth Chase, the game shares much of its inner workings with the original version. Fans of Kalamba will realise that this points to 6 reels and a whopping 4,096 ways to win paylines system. Stacked wild systems, multipliers and free spins are the makings of a deal as sweet as the best ever Easter egg, and 3 tiers of progressive jackpots finish off the end-product by tying a pretty bow around the entire deal.

The bunnies and chicks running around on the reels have been designed to create a feel of happy animation and this ties in nicely with the general atmosphere of the game. Mountains rising behind stone-cut reels create an undeniable link with the original game and this will appeal especially to fans of the initial release.

Decorated eggs appearing on the reels make for a very pretty site, but it’s the higher-paying symbols like the sabre-tooth tigers, the deer and the bears that really boost the bank-roll.

Mammoth Chase features a bonus symbol that will trigger between 8 and 20 free games, all depending on how many scatters were in full view when the bonus game was triggered. Despite the game being a high-volatility slot by nature, the free spins bonus round is triggered more often than in the case of most other similar games.

As an extra sweet treat, whenever the free spins game has been activated, 2x and 3x special multiplier wild symbols will come into play. These wilds represent 3-in-one or 2-in-one matched symbol stacks and act as a royal boost, especially when playing at higher bet increments.

And let’s not forget to make mention of the special Mammoth symbol. These symbols are the keys that will unlock one or more of three fantastic progressive jackpots. We’re very much looking forward to a bit of reel spinning fun and tasty wins over Easter, and Mammoth Chase looks set to provide all that, and more!

Get the reels spinning and start WINNING! Play online slots and strike it rich.