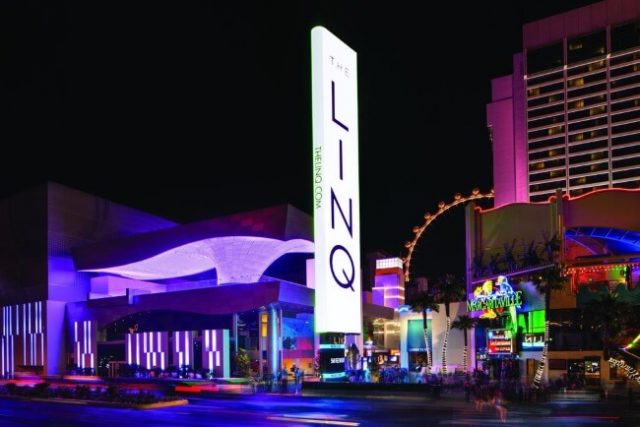 The interactive lounge in The Linq, a premier hotel and casino on the Las Vegas Strip, may soon feature an experiential gaming space. Caesars Entertainment Corporation, which owns the property, has announced that it hopes to use holograms to complement The Linq’s existing facilities in the near future.

The Re:Match Bar inside the venue already offers 27 touchscreens on its bar top, allowing players to enjoy at-seat gaming in a whole new way. The futuristic holograms will add another element of immersive entertainment, and are a clear reflection of the Caesars Entertainment Corporation’s stated intention to diversify their portfolio even more.

The Re:Match Bar’s attractions will be supplemented with a new area that will open near the centre of The Linq. This will feature a range of hologram-based games, which will be controlled by player gestures.

Balloon popping, tic-tac-toe, rock-paper-scissors and other games will be available in this exciting new format and should give visitors a more complete gaming experience. Players will also be able to photograph the action, and then share the images to social media.

As well as the holographic casual games, the Las Vegas Review Journal reports that The Linq’s innovative new entertainment zone will also house hologram-based, life-sized dancers, eSports gaming stations and an interactive art installation. This piece will feature LED sculptures and will allow viewers to become an active part of the artwork. Six virtual reality bays will be used, and users will be able to view themselves in the role of superstar athletes, action heroes and even astronauts.

Caesars Entertainment Corporation Executive Vice-President for Gaming and Interactive Entertainment, Christian Stuart, said his company is “redefining the gaming experience”. The idea is that guests interested in exciting, new games will find what they are looking for in the experiential space. The new project comes at the same time as the company is selling off non-strategic properties in South Africa and even on the Vegas Strip, and has also seemingly lost interest in bidding for the Hellinikon Casino operating licence in Greece.

Although the Corporation is already one of the biggest names in the gambling industry these moves should help it to expand even more, thanks to 2 different effects. As well as innovative new entertainment attracting more guests, their properties will now be more strategically placed in relation to each other. Players can take full advantage of the Rewards Programme this way, so they’re likely to spend more time and money at the different venues.