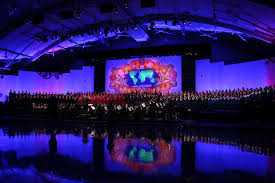 One of the biggest attractions of land-based casinos involves the entertainment options. Shows and performances aren’t a feature of all casinos, but the top casinos draw gamers and others who are looking for an evening out. These casinos present top-ranked musicians and other types of shows that are, in many cities, the area’s best entertainment venues.

This December, Canadian casinos have outdone themselves with a wide range of world-class performers who will be delivering great shows around the country. Regardless of whether you want to combine gambling pursuits with some nightlife or you are simply looking for a pleasant evening out, you’ll have a wide variety of choices as you research how to find the best Christmas Entertainment this December.

Ontario has multiple casino sites with high quality entertainment options. One of the largest and most expansive is the Windsor Caesars Casino.

The Windsor Caesars Casino is located in Windsor, just across the border from Detroit Their Colosseum is a 5,000-seat theatre which features world-famous performers who provide music, dance, comedy and other types of shows for all tastes and fans of all genres of entertainment. Kicking off this December, Colosseum is featuring the iconic country music star Kenny Rogers who presents his "Once Again It's Christmas" tour. On December 10th Celtic Woman, a female and of traditional world-renowned singers and musicians will be performing their Home for Christmas Symphony Tour with signature hits and holiday favourites. On December 12th the legendary rock band Styx will appear in their blended style of pop rock, hard-rock guitar and epic ballads. The S'Aints band will be on the Colosseum stage on December 20th for their "Sleighing Hunger" All-Ages Charity concert and on December 22 the harmony of The Vocals will delightclassical and contemporary pop fans.

The influx of visitors from Washington State has created a vibrant nightlife in Vancouver where the casinos offer top entertainment.

The River Rock Casino, just outside of Vancouver British Columbia, has a reputation for bringing the best acts to the city. This December three shows are planned which bring the Christmas spirit of excitement and joy to casino visitors. On December 19th the memories of the famous Rat Pack — Dean Martin, Frank Sinatra, Sammy Davis Jr. and Joey Bishop — will be recreated by a new group of Rat Pack singers who will combine the original Rat Pack’s energy with a 21st century sound. On December 22nd casino-goers can party all night at the Xmas Ballroom Dance with a live band, music including plenty of dancing. The night features the top local bands including Federico, Newton, Betty and the Orient Express band and Sunny. The show will be hosted by Fairchild Radio DJ William Ho. To wind down from Christmas and gear up for New Years Eve the Burton Cummings Band will be performing on December 30th at River Rock where the Winnipeg native will be belting out some of the ’60s, ’70s and ’80s best hits that Cummings created in his years as part of the Guess Who band.

Quebec is a favourite venue for all performers where they can kick up their heels and join in with lively Quebec crowds who love all kinds of music.

At the renowned Casino Du Quebec in central Montreal guests can enjoy many different types of shows including cabaret-style, burlesque, electronic music and a wide variety of shows by well-known singers from Canada and abroad. The Casino has several performance halls, bars and gaming areas where guests can enjoy the shows which are a major part of Montreal’s effervescent nightlife. The popular Forever Michael show will be on the stage multiple times in December with a tribute to Michael Jackson’s most popular songs of the ’80s and ’90s. The show includes 10 dances, 6 musicians, 2 lead singers and 2 back vocalists who bring Michael’s art to life. Forever Michael appears on December 10th, 11th, 12th, 18th, 19th, 24th, 26th and 27th. Another popular performer, Martine St. Clair, performs Christmas songs along with 7 accompanying musicians. Martine will be singing holiday classics for a magical, enchanted evening. Martine performs throughout December with dates on December 8th, 9th, 13th, 15th, 16th, 20th, 22nd and 23rd.

The Casino Nova Scotia draws visitors who want to combine the beauty of eastern Canada with the vibrant life of Halifax.

The casino takes gamers and other entertainment-seekers through December and right up to New Years with a wide variety of casino shows. On December 12th and 13th Roger Hodgson, the legendary singer-songwriter, will be performing. Hodgson’s December 12th show is completely sold out but an additional December 13th date was added so that fans could come and enjoy his unique talent. David Myles, a Halifax native, will be performing his unique blend of folk/jazz on December 21st On December 31st, as casino guests prepare to start the New Year, Hallifax natives Matt Andersen and The Mellotones will be on stage at the casino’s entertainment center for an evening of funk, soul and R&B.

The McPhillips Station and Club Regent casinos of Winnipeg join forces to bring casino visitors the best in entertainment during their casino adventure.

This December the Winnipeg casinos will be featuring WCF in a Holiday Hilarity Comedy Show on December 4th. On December 5th everyone is invited to join the Abbamainia show in a wild salute to the ’70s bands Abba and the Bee Gees. The cheerful, joyous music will be a great prelude to the merry month of December. On December 31st the casino invites all of Winnipeg and other visitors to join the free dance night with the Danny Kramer Dance Band. The entire night will be devoted to music, dancing and a happy start to the New Year.