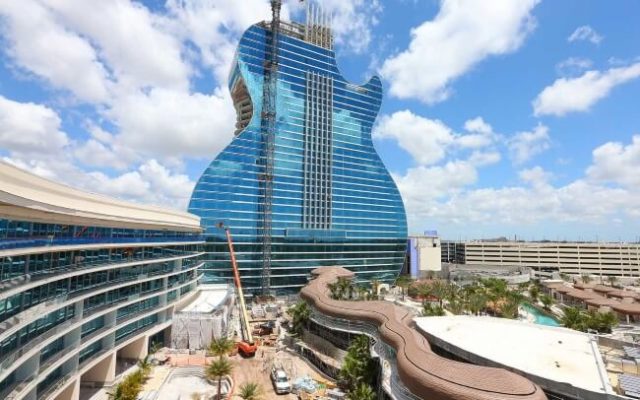 Florida’s local gaming industry is about to receive a major boost as the Seminole Tribe of Florida gets ready for the official re-openings of its Seminole Hard Rock Hotel & Casino Tampa and Seminole Hard Rock & Casino Hollywood venues. The cost associated with the expansion of both venues had apparently surpassed the $2.2 billion mark but the operator has said that it considers every penny spent to have been worth the expense.

The official opening date has been announced as October 24. The highlight of the two venues is without a doubt the brand new guitar tower. The location of the tower and development is Florida South and the presence of the guitar tower is expected to put this particular region back on the global gambling map.

Read More… US Family Owns Up To Illegal Bookie Charges

Prepare To Be Impressed

Hard Rock International Chairman and CEO Jim Allen is very much looking forward to the opening of the grand guitar hotel tower. The hotel is literally shaped to take on the form of a giant guitar and the expectation is that visitors and tourists from all over the world will be making their way to Florida to catch a glimpse of the special landmark.

On a practical level, the tower will feature 1,271 luxury guest suites. The casino itself has been expanded too and will now cover a total of 195,000 square feet. At least 200 games tables will be included in the overall offering. And since no guitar would be complete without strings, the tower will feature 6 illuminated guitar strings on each side of the building.

But this resort is about so much more than what meets the eye. In addition to the 200 table games, the casino floor will also treat patrons to 3,100 slot machines, a massive 45-table Poker room, a non-smoker slots room and a special VIP player enclave that will be known as the Plum Lounge. A variety of high-stakes VIP offerings will be on the go in the enclave.

In CEO Jim Allen’s opinion, the long-awaited guitar tower will be a smash hit with visitors from all over. He has said that he is convinced that the tower will change the entire gaming landscape in the state and that Florida will never be the same again because of the tower’s magnificent and awe-inspiring presence.