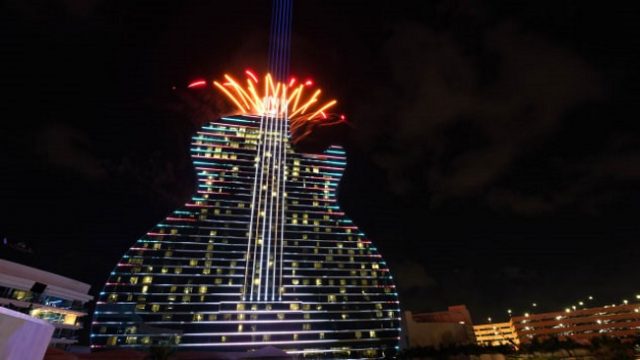 The world’s very first guitar-shaped hotel has been unveiled in Hollywood, and quite befittingly, it belongs to none other than the Hard Rock International Casino & Hotel group. The enormous and certainly very impressive 450m guitar-shaped hotel forms part of the $1.5 billion development launched some time ago by Hard Rock International as part of the Seminole Hard Rock Hotel and Casino Hollywood extension initiative.

The expansion is the latest of two major expansions recently undertaken and unveiled by Hard Rock, with the most recent one following a $700 million expansion to the group’s Seminole Hard Rock Hotel and Casino Tampa venue.

Unrivalled Not Too Tall An Order

The Hollywood development is a sight to be behold, and certainly justifies Hard Rock International’s proud statement that the development “catapults the integrated resort and casino to world-class status as an unrivalled gaming and entertainment destination”. The guitar-shaped wonder that is the hotel is what first up grabs the attention, but the development also includes an expanded casino floor spanning all of an impressive 195,000 square feet of gaming space as well as a massive Hard Rock Live performance venue with a capacity of 7,000.

As for the gaming space, visitors will now be able to fully switch off from the humdrum of daily life by kicking off their work-shoes and being fully immersed in no fewer than 3,100 slot machines, a simply grandiose 45-table Poker room, and two special VIP high-limit slots rooms; smoking as well as non-smoking.

And as if this isn’t already catering for every conceivable preference, Hard Rock has also thrown the following into he mix: a 13.5-acre “pool and lagoon experience”, complete with over-water cabanas, a luxury spa and fitness centre that spans all of 42,000 square feet, a night club and a day club experience and all of the lounge and entertainment and retail options and outlets that anyone could possible ask for.

CEO Satisfied By The End-Result

Hard Rock and Seminole Gaming Chairman and CEO Jim Allen is understandably excited by the grand opening and very satisfied by the outcome of the development. Allen recently commented on the newly-expanded venue and said that he was happy to report that the leading casino and entertainment group had achieved exactly what it had set out to do right from the start, which was to create a world-class entertainment, dining and gaming experience. Not to mention even the fact that the first-of-its-kind guitar-shaped hotel is sure to attract visitors from all over the country as well as the world.