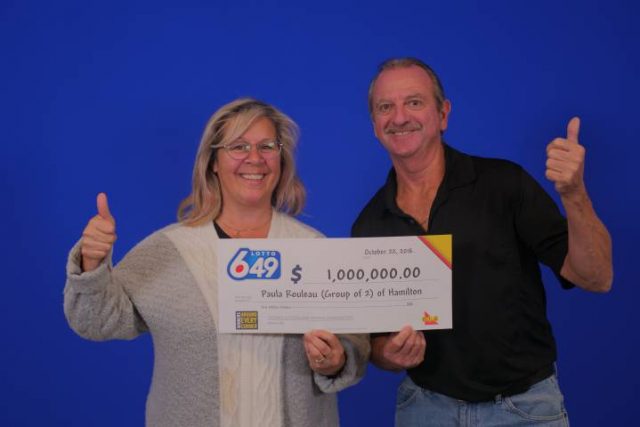 Paula Rouleau and Frank Reeves both work for the local Canada Post news outlet, and have been shocked by their fortunate and unexpected win. They reportedly plan to use some of their winnings to take a relaxing family vacation while they consider what to do with the remainder of their newfound windfall.

The Hamilton couple are parents to three children and grandparents to four beloved grandchildren. Naturally, most – if not all – of these family members will accompany them on their family holiday after Rouleau and Reeves purchased their winning ticket at Rexall on Queenston Road.

In related news, another lucky Canadian, this time from Waterdown, has also won a million-dollar cash prize. Katherine Orzel struck a MaxMillions jackpot in the October 19 Lotto Max draw, becoming one of dozens of players to have gotten lucky in that particular draw and won themselves an impressive nest-egg in exchange for the price of just one ticket.

Another Hamilton resident, Deborah Abbott, managed to collect a $100,000 win with ENCORE during the same draw as well, according to local media sources. The 63 year old office manager and mother is now planning to pay off some bills, complete some home renovations, and upgrading an upcoming trip to a first class ticket with her wealth.

Clearly, it has been a very busy and fortunate time for lottery players in Canada. It was just a little over a week ago when Steve Hillier also became the winner of a new $1 million jackpot – and just a few days later, he won a seat in Ward 14 to become a councillor of Ontario’s London city as well.

Bradley Houston of Winnipeg is yet another lotto player who was transformed into an instant millionaire late in October. After buying a winning ticket at the lottery kiosk in Grant Park Shopping Centre on September 28, the punter confessed that his hands were shaking a few days later as he scanned the ticket six times to check that he had, in fact, won $1 million in cash.

He had indeed. Houston has since revealed that he plans to buy a boat with his fortune, and would also love to move back to his hometown, Pine Falls, after he retires early to enjoy life on the wealthier side.

If you love the lottery, try out Instant Win games at a top rated Canadian casino online!