The fate of the Greater Sudbury Casino project in Ontario is still a mystery, with discussions about the future of the Kingsway Entertainment District addition still one of the most-covered topics in the area in the face of the upcoming municipal elections in October.

As recently reported, the project has been at the core of ongoing discussions in spite of the fact that the new city arena plans have already received the green light by the City Council. At the present, the province’s Local Planning Appeals Tribunal (LPAT) is assessing the decision that approved the project at hand.

The Greater Sudbury casino expansion has also faced hefty opposition. Critics of the plans have argued that the decision-making process through which they were approved were flawed. Opposers have also noted that not enough public consultation has been held on the matter thus far – and with plenty of hurdles still to clear, the project might not kick off in the first half of 2019 as originally intended.

Investors have replied that the money that Gateway Casinos plans to invest in the property will transform the city, giving both the entertainment district and the down-town area plenty of opportunities to benefit. Additionally, the current location on Elgin Street could host three major projects, including a performance and convention center, a library, and a new Sudbury’s Art Gallery.

The integrated plans for the city arena were approved by the City of Greater Sudbury last year. A main arena, hotel, restaurant and expanded casino were included in the blueprints. The Kingsway Entertainment District project’s first phase will include the construction of an arena and event center which will be owned by the City, along with a gaming complex that will be owned and operated by local giant Gateway Casinos and Entertainment. A hotel, restaurants, and an outdoor festival square are also on the cards. 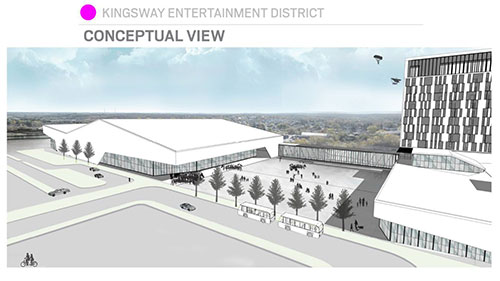 As previously reported, the complex is set to open its doors to the public in 2020. Thanks to the approval, the City was allowed to re-zone the Kingsway location and develop a financial plan to move forward with its design during the first few months of 2018. The investment is anticipated to reach $100 million or more, while Gateway alone has invested around $60 million therein.

Still, the project will now have to be given the court’s permission to go ahead, regardless of the fact that the Sudbury City Council has already approved it after a 10-2 vote. The resolution of the court will at least put to an end the ongoing fight between opponents and proponents of casino expansion in the Ontario region.