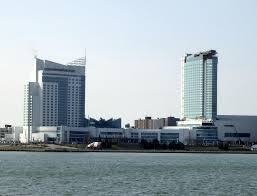 In this week’s Canadian casino news, the Windsor casino received good news while a deadbeat gambler from Singapore didn’t get the news that he wanted.

The last few months have been bonanza months for Windsor’s Caesar’s Casino, thanks largely to the weak Canadian dollar. Economists may not be thrilled to see the Canadian dollar plummeting in value but for the Windsor casino, which is located across the border from Detroit and attracts many American players, it’s good news indeed.

Recent quarters have seen revenues climb as more visitors see value in gambling in Canada. In the five years prior to 2014, Caesar’s Casino revenues dropped approximately $273 million for average yearly income of just $236. However, the weak Canadian currency, the strong US economy, cheaper gas prices and other elements have come together, giving good news to the Windsor casino.

The Canadian Tourism Windsor Essex Pelee Island corporation notes that statistics from June 2015 show that almost 50,000 more Americans crossed into Canada in their cars in June than had crossed over just the month before. When compared to June of last year, the numbers show that approximately 90,000 more Americans entered Canada in their car. That increase seems proof positive that US tourists are targeting Canada as their vacation destination, which bodes well for casinos which cater to the American gamblers.

Tourists confirm that the low Canadian dollar played a big part in their decision to spend time (and money) in Canada. Since new border regulations were introduced in 2009, casino and other local tourism sites had been struggling. The latest statistics indicate that Americans might be looking past those restrictions towards a rewarding tourism experience.

Caesars Windsor spokeswoman Jhoan Baluyot, said that, one major consideration for U.S. casino players who are investigating Canadian gambling options is the exchange rate. The casino has decided to actively promote the weak CAD and the value that tourists receive when they bring in American dollars, due to the more lucrative exchange rate. The casino is conducting its promotions via billboards and radio ads. The marketing is directed towards reminding Americans that they will get more from their dollar when they play in Canada. In addition, they will benefit from tax-free casino winnings. During the past few months Caesars casino hotel has been enjoying a 80% to 90% occupancy on weekdays, and they have been full over the weekends, so it appears that the marketing is working.

Other Windsor hotels have also seen an increase in occupancy, with statistics that indicate that the overall increase is approximately twelve percent. Many of the visitors who find accommodations at other hotels head to the Caesars Casino to enjoy gambling entertainment. In 2015 Windsor was named one of the top 20 most-visited Canadian cities and its tourism industry is growing at twice the rate as that of Ontario.

In addition to the Windsor casino, the Cascades Casino Kamloops, located in British Columbia, is attracting American gamers. The new $40 million entertainment complex is employing over three hundred people. Many of the casino’s patrons are expected to come from Washington State, just over the border from B.C. The casnio’s owner, the Gateway Casinos & Entertainment Group is encouraged and has decided to expand adn develop more properties in Edmonton.

A Singapore gambler has been trying to get out of paying his casino debt by hiding out in Canada. However, this week the Canadian courts ruled that he would have to face the music, regardless of his location.

Jian Tu took advantage of the Marina Bay Sands Casino’s policy of allowing high rollers to play on credit and settle up after their gambling session was over. This is a common practice of many casinos, including Canadian casinos, because it gives the gamblers the opportunity to play more games than they would otherwise be able to enjoy. Giving a gamer a line of credit allows him to circumvent the difficulties of moving large sums of money to and from the casino and to reduce restrictions due to time limitations.

Jian Tu.played on this policy at the Marina Bay Sands Casino in Singapore in 2013. His line of credit, provided by the casino, was worth almost $10 million. Jian Tu played through that line of credit and kept playing — by the time that he finished he owed the casino over $1 million. To avoid paying the debit Jian Tu fled to Ontario. The casino made numerous attempts to contact Tu and collect on the debt but, after several unsuccessful contacts, they filed a case in the Ontario Superior Court, requesting that the court seize his assets in order to cover the debt.

Jian Tu moved to have the court case dismissed. He denied the casino’s claim that it had been trying to contact him and he claimed that, due to an "exclusive jurisdiction" clause, any financial disputes between casino and player were in the jurisdiction of in Singapore courts. The claim, however, was dismissed by Ontario Superior Court Judge Sean Dunphy. Dunphy ruled that Canada would accept responsibility in helping the casino recoup its losses. Judge Dunphy said that he found Jian Tu’s claim that he had never received notice from the Sands on his outstanding debt to be unbelievable. According to Dunphy. Tu’s defense in trying to have the court case dismissed was a clear attempt to delay payment.

In his ruling, Dunphy wrote that “Bald, hearsay statements to that effect which have been made without explanation of the circumstances carry little weight in these circumstancesâ€¦even if I accepted the defendant's assertion (which I do not), the defendant would have still to explain his delay in responding to the judgment and to provide the court with some indication that he has a bona fide defence on the merits." In effect, Judge Dunphy said, moving jurisdictions could only delay the inevitableâ€”Jian Tu must settle debt to the Singapore casino one way or another.

According to the Ontario Superior Court Tu will be responsible for repayment of the debt plus court costs and interest on the debt. All together, this is expected to total $11.13 million CAD. The casino has now proceeded to register writs of seizure and sale on Tu's Markham property.