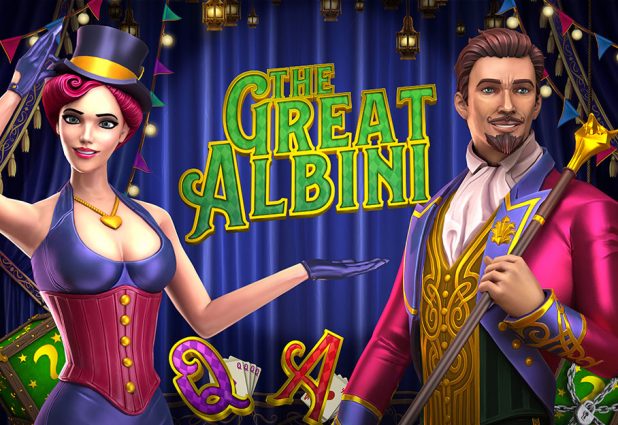 Popular slots developer Foxium has just announced that they will be releasing a brand new slot, and despite the fact that it has precious little, if anything, to do with the holidays, its jam-packed with a whole lot of magic! The star and namesake of the game is the The Great Albini, who, together with his lovely assistant Lilly, doesn’t shy away from conjuring up a whole lot of magic on the game’s 5 reels and 25 paylines.

It’s a theatrical event when the pair arrives in a hot puff of purple smoke, but it’s when the reels start rolling that the true magic starts to happen.

Take Your Seat At Centre Stage

The slot provides for a whole lot of magic and all of the action takes place on a centre-stage. Symbols include everything from locked vaults to knife-throwing targets and players are soon engrossed in the world of the mysterious. Foxium has become renowned for developing slot games with a bit of a quirky twist, and we must say, this is what we love most of all. Gone are the usual hum-drum of animations and ding-dong sounds. Just as soon as the game is launched, it’s obvious that something very different to the usual is about to happen.

And boy, does all of the anticipation pay off in a big way! The Great Albini is more than just special effects, there’s a lot of winning to be had here! Albini himself is the top-paying symbol, and best of all, can be stacked on the game’s reels in order to award even bigger scores.  The wilds appear on reels 2 and 5, and free spins symbols must appear in groups of 3 to trigger the Free Spins Bonus Round.

Once the 12 free games have been triggered, the reels will expand from 3 rows to 6. Lilly, always willing to do her part as assistant, when making an appearance during the bonus round, remains locked on the reels. Any wins are then awarded on the double!

It All Happens On 9 January

There is also a mystery box to be opened, which makes for yet another special feature. The magic just never seems to stop, and it’s all coming to online as well as mobile casinos on January the 9th.