Sleight Of Hand Casino Cheat Caught In The Act 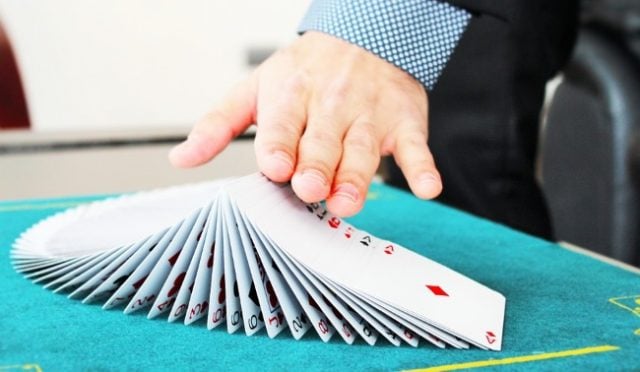 Whilst it may be true that Poker is first of all a game of skill, it certainly doesn’t mean that all odds are instantly out the window. The same goes for dealer-derivatives like High Card Flush. This may be regarded as one of the easiest games on any casino table, but even so, there will be ups and there will be downs. Its practically impossible to keep up a winning streak going for days on end. Unless your name is Frederick Steven Nolan, the man who recently got “caught” winning in excess of $38,000 playing cards day in and day out at the Crazy Moose Casino in Washington.

In fact, so nifty did Nolan prove himself to be at scoring the ever-elusive straight flush, that he did so without as much as a show of nerves or a breaking of sweat. In the end, Nolan’s only real transgression was that he had come across as a little too confident. That and the fact that Frederick Steven Nolan had resorted to sleight of hand in order to deceive his dealers.

The rogue magician was first spotted cheating during December of 2018. After that, his repeated (almost daily) visits to the casino raised even more suspicion. So much so that a computer tracking program was eventually used in order to track Nolan’s movements and record his winnings and losses.

With the computer program analysing Nolan’s every move, it was only a matter of time before a reasonable profile was compiled and one that detailed what may be referred to as the player’s win/loss record. Smart-tech ultimately meant the undoing of the cheating player as the Washington State Gambling Commission was then able to gather the necessary evidence showing a string of repetitive cheating.

Beat By His Own Odds

Nolan’s favourite cheat of choice was a combination of distracting the dealer and then moving cards around by means of sleight of hand. This particular action would ultimately result, in Nolan’s case at least, in what is referred to as a straight flush.

Nolan tricked his way into a straight flush for a total of 38 times over the course of only about 40 days. The probability of hitting a straight flush is estimated to be 0.0279. It doesn’t require a master at mathematics conclude that the trickster had a couple of rogue Aces up his sleeve. The 51-year-old trickster now has to answer to a first-degree charge of theft and a second-degree charge of cheating.