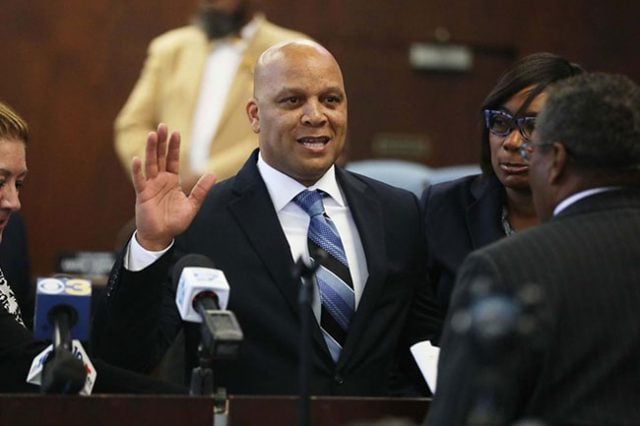 The mayor of Atlantic City will reportedly not be prosecuted for his recent fighting scandal outside a local casino. The governing official recently got into a late-night brawl outside one of the boardwalk’s busiest gambling destinations earlier this month, stirring controversy among local residents.

Earlier this week, Cape May County Prosecutor Jeffrey Sutherland revealed that AC Mayor Frank Gilliam Junior and Councilman Jeffree Fauntleroy would not be facing any criminal charges with regard to what was termed their ‘physical altercation’. The fight took place outside of the Golden Nugget Casino in the early hours of November 11, 2018.

The day after the incident, local media channels reported that the two officials had gotten embroiled in fisticuffs with at least two other unnamed individuals outside of the gambling venue’s nightclub, Haven. Sources at the scene claimed that Gilliam had been caught ‘punching and choking’ a female security guard on the night on surveillance footage.

Gilliam Admits to the Fisticuffs

Gilliam, who was elected as the mayor of Atlantic City back in January, has admitted to getting into the fight in question, but has insisted that it was not a big deal. The city’s Press reported that the surveillance video did indeed show the mayor; Fauntleroy and a number of other individuals in the midst of a fight that lasted about 45 seconds from start to finish. Security personnel were also seen escorting the two men from the venue.

Mayor Gilliam reportedly took a swing at two people on the night, but failed to make contact with either. Fauntleroy, on the other hand, managed to land a number of punches, while also throwing one of his opponents to the ground in an apparent fit of rage.

The offices of the Cape May prosecutors, to which the matter was referred to avoid a conflict of interest by city officials, later issued a formal statement noting that it would not be ‘pursuing any criminal charges’ with regard to the fight.

With that said, three employees of the Haven club have decided to lay civil complaints against the two politicians for their behavior. While the video does not seem to show the aforementioned female security guard being hit, NJ.com revealed that her complaint accuses Fauntlery of threatening to ‘f*ck [her] up’. The complaint will be heard at North Wildwood municipal court on December 11 this year.

In the meantime, New Jersey’s governor Sheila Oliver has being avoiding calls demanding that Gilliam and Fauntleroy be forced to step down. In her eyes, the ‘deeply troubling’ situation must be thoroughly investigated before any further actions can be taken.

On a quest to win BIG?
Play casino games online at the best casinos in Canada!