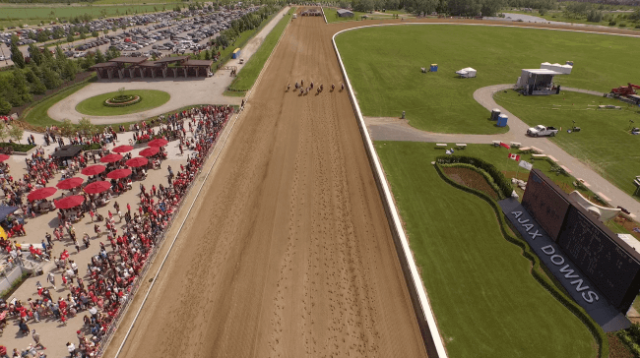 The legendary Ajax Downs Racetrack this year celebrates its 50th birthday. That’s half a century in business and a very special achievement by any measure. The track is a popular entertainment hot spot and the only one of its kind to offer Quarter horse racing in the Eastern regions of Canada. This is complemented by other superb race offerings, with wiener races (Dachshund races) being a particularly popular inclusion on the annual calendar.

The track is situated on Highway 2 and on June 14th drew the crowds when it celebrated its birthday and 50 years of stellar achievements. But the celebrations weren’t all about business only; its been 50 years of special contributions to the growth and development of the Canadian horse racing industry, after all. And that’s something to celebrate, if ever a special event deserved celebration.

The Result Of A Life-Long Dream

The track was named Ajax Downs as recently as 2005. It bore the name of its founder before the name was eventually changed to a more commercially appealing description. It was previously known as Picov Downs, after Russian founder Alex Picov.

The track initially formed part of Picov’s farm and he developed it as such in order to realise his life-long dream of owning a Quarter racing venue; racing that really changes lives for the better. Picov also dreamed about developing live horse racing in the Durham area.  Initially the plan was to only host private races among friends and family, but as the events grew and gained momentum, so did the public interest.

The track was eventually declared open to the public and to various race events in 1969. A special and signature feature at Ajax is the J-shaped track; a track now recognisable all across the province of Ontario.

It hasn’t always been smooth sailing for Ajax Downs. The upkeep involved with professional track horse racing is commonly accepted as being exceptionally high-maintenance and very expensive. But help did come in the form of an on-site slots venue. To put matters into perspective, the on-site gaming venue has managed to generate some CA$80 million in revenue.

A brief scare occurred in 2012 when it was announced that Canada’s slots-at-racetracks initiative would be terminated. The initiative fuelled the economic viability of racetrack venues all over the country. But relief came swiftly when it was decided not too long after that slots would be permitted on-location just as long as the activities were managed Great Canadian Gaming.

The deal was accepted and considered done and business was able to continue as usual. Which will hopefully be the case for 50 more years for the legendary Ajax Downs.

Celebrate the BIGGEST wins online. Play slots and so much more!