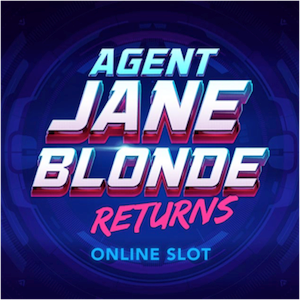 Online casino software developer Microgaming always has something unexpected up its sleeve for its dedicated Canadian fans. This year is evidently no exception, as the company has now announced that the next slot machine in the pipelines for a Q4 release will see one of its most popular heroines of all time reappear on the screen once again.

Agent Jane Blonde Returns will revisit the original Agent Jane Blonde slot, seeing the character back on the reels for even more action-packed secret missions and epic battles. The new game was unveiled at this year’s iGB Live! 2018 conference in Amsterdam, and comes as an exclusive collaboration between Microgaming and its partner studio, Stormcraft Studios.

All the latest games at Spin Casino Online

Reviving a Classic from 2005

The original Agent Jane Blonde slot was massively popular, and has remained so since it first hit online casinos back in 2005. To celebrate the rich history of this cornerstone title, Microgaming has opted to revive the franchise with fresh new graphics and features, which will play out against a 5 reel and 15 payline setup.

Naturally, the theme will still focus on the sensational superspy Jane Blonde, seeing her becoming embroiled in even more thrilling escapades and battling a whole new range of villains. Agent Jane Blonde Returns is reportedly also set to feature respins, stacked wilds, and retro, neon-inspired visuals. The title will be released as the second slot to be created under Microgaming’s exclusive deal with Stormcraft.

Where Microgaming is present, you can always expect the unexpected. The behemoth software supplier celebrated the return of its favourite secret agent at its iGB Live! Stand, where visitors were able to experience the upcoming release for themselves. Also on offer were complimentary scoops of ice cream, with guests invited to choose from one of nine tempting flavours.

Back at the developer’s headquarters, Games Publisher David Reynolds commented on the upcoming release of the new title this year. According to Reynolds, the success of the Fortunium online slot has inspired his company to expect great things from Stormcraft Studios in the future. He noted that Agent Jane Blonde will boast fantastic graphics and a dynamic soundtrack too, introducing players to the wonderful world of espionage in the best way possible.

Reynolds is confident that the new game will be a big hit among new and seasoned players alike, especially since many veterans will recognize Agent Blonde from the original iteration of the franchise. Canadian players can look forward to the new title soon, although no official release date has been set just yet.