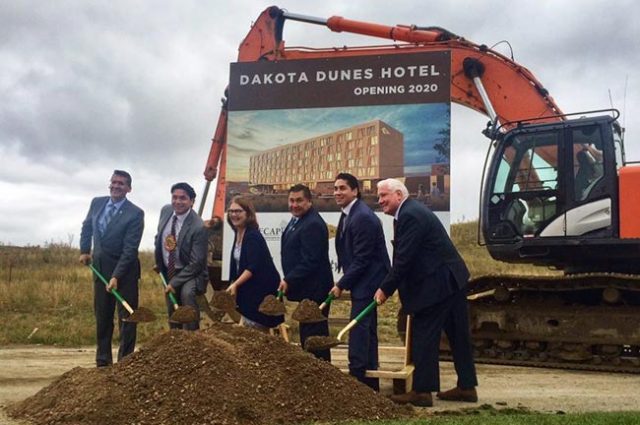 The Whitecap Dakota First Nation tribe officially broke ground on their planned $38 million Dakota Dunes Hotel project last week. The project is based just south of Saskatoon, Saskatchewan, according to news reports on the matter.

Indigenous Services Canada has also reported that the property will include a 155-room hotel, a pool, a fitness and business center, and a restaurant for its patrons. The hotel and entertainment destination is set to open its doors in 2020, if all goes according to plan.

Goal to Create a Tourism Hub

The Dakota Dunes Hotel is a major part of the goal to transform Whitecap, Saskatchewan into a premium tourist destination, according to Darcy Bear, the Chief of the Whitecap Dakota First Nation tribe.

According to Chief Bear, the hotel is an essential part of his tribe’s vision to see the town become an invaluable tourism resort in Western Canada. Commenting on the breaking of ground for the project, he added that Thursday was a truly exciting day for his First Nation as it continues down its economic path of creating a sustainable local community.

The majority of the funds allocated to the project will reportedly be coming from the First Nation and private stakeholders. $8.6 million will also be contributed by the federal Canadian government. The property is additionally expected to create around 230 jobs during its construction, and around 150 jobs when it opens.

Plenty of Entertainment for All

The Dakota Dunes Hotel is projected to generate over $8.5 million in annual revenues once fully operational as well, according to a press release on the subject. The First Nation is already operating the Dakota Dunes Casino, which is based on the Whitecap First Nation, around 20 minutes south of Saskatoon on highway 219.

The property boasts an 80,000 square foot casino floor in a Vegas style, which includes an extensive range of 620 slot machines, 18 table games, a restaurant, banquet facilities, and seating for up to 450 people. There is also an attached entertainment venue boasting live shows and space for up to 570.

Next to this casino, in the spirit of the tribe’s goal to create a tourism hub, is also the popular Dakota Dunes Golf Links. The 18-hole, full service, Cooke-Carleton-designed golf course comes complete with a brand new 7,100 square foot clubhouse, a 64-seater restaurant, and 900 square feet’s worth of exclusive Pro Shop retail opportunities for its visitors.