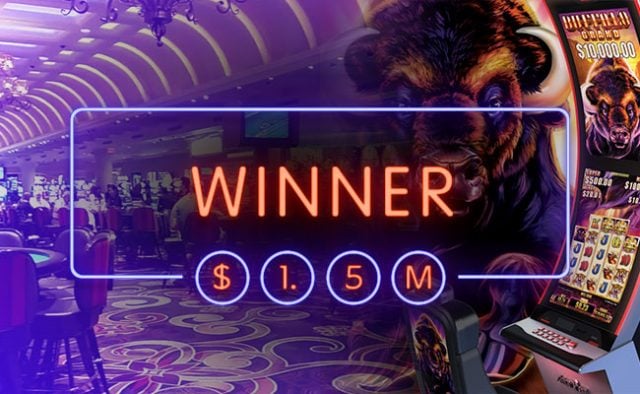 Over in the US of A, punters across the nation have had a great year so far as they scored jackpot after jackpot in their casino and lotto games of choice. Now, the American arm of gaming machine developer Aristocrat Leisure Ltd has revealed that early last week, a lucky female punter over in Nevada hit the grand jackpot in one of its most popular slots: Buffalo Grand.

The Buffalo Grand video slot machine in question reportedly paid out a cash prize worth over $1.5 million in a single spin. According to an official press release from the Vegas-based Aristocrat Technologies Incorporated office, the anonymous gaming aficionado won her life-changing jackpot of $1,559,521 while enjoying a few afternoon spins at the Suncoast Hotel and Casino in the north western part of the Silver State.

Millions Won in a Single Spin

Aristocrat explained that the five-reel Buffalo Grand slot is the latest version of its iconic Buffalo-branded game franchise. The title in question comes housed in the company’s impressive Arc Double cabinet. The developer further noted that the game’s “brilliant graphics and huge sound effects” offer players excitement and thrill, which is enhanced further by its reel growth features, lucrative wild multipliers, and spectacular cash jackpots.

According to the developer, which originally started out in Australia a few decades ago, the lucky winner hit her jackpot at exactly 6:52pm at the local entertainment destination mentioned above. Their statement noted that the slot landed on the Grand Jackpot area of the title’s bonus wheel, indicating that she had won huge in just one fortunate spin.

Based in the Queensridge suburb of Las Vegas, the Suncoast Hotel and Casino is owned and operated by the Boyd Gaming Corporation. It boasts a gaming floor that spans over 95,000 square feet and offers 1,800 slots and video poker machines, not to mention 34 gaming tables as well.

Along with these premium gaming offerings, the 432-room hotel also offers a 600-seater bingo hall, a state of the art sportsbook, an indoor cinema, and a ten-pin bowling alley. There are also numerous dining establishments to take advantage of – not to mention the occasional multimillion-dollar jackpot, it would seem!

Founded in 1953, Aristocrat Leisure Limited is an ASX100-listed firm and one of the planet’s leading gambling solution suppliers. The developer is licensed in more than 240 gaming jurisdictions, and offers its products in more than 90 countries at the present. The firm employs over 5,000 employees across these jurisdictions, which deliver exceptional products and services through the use of creativity, innovation, and the latest in gaming technology.

There are HUGE jackpots waiting to be won online.
Could YOU be the next lucky winner?