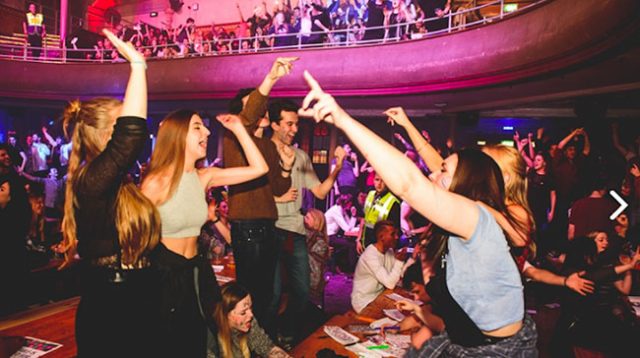 Downing Street, pork pies and Bingo. It really just doesn’t get any more British than that. All three are age-old traditions in British society, but one of the three is undergoing nothing short of a modern-day revolution. And no, it’s neither Downing Street nor pork pies.

Thanks to Dabbers, a Bingo hall that recently opened its doors just a stone’s throw away from some of London’s most trendiest clubs and hipster bars, a British pastime previously associated with the old and possibly demented looking for one last jab of excitement before they gave up and pegged out, has just been handed a brand spanking new lease on life.

At first glance, you wouldn’t guess that this had anything to do with dotting off numbers on a card and hoping for a winning pattern. In fact, the only clue giving any of it away is the fact that the happily dancing and trotting crowd is waving the letters B.I.N.G.O above their heads in the air in a celebratory way that is most probably egged on by the consumption of liters and liters of ale.

In fact, the drinks menu includes everything from craft beer to designer cocktails. And forget about chicken and chips being the only option when the hunger-bugs come a’gnawing. Modern-day Bingo allows for prawn-skewers, Caesar salad and spinach and pumpkin falafels.

We have to wonder what our grannies would have made of all of this. Some may very well have cried poppycock, but we strongly suspect that most of them would have felt quite at home.

Putting On A New Jacket

According to top market research firm Mintel; the traditional Bingo halls of yester-year are disappearing at a rapid pace. New ventures like Dabbers are however attempting to provide a lifeline for the game by drawing a younger crowd.

The plan seems to be working a charm as Dabbers is already planning on opening two more venues, one in London and the other in Manchester.

But it’s not only Bingo that has come under the transforming surgeon’s knife as far as style and approach are concerned. Indoor golf, shuffleboard and even ax throwing are all undergoing a major revamp and being presented in cool new ways.

The trend is being instigated by shopping center owners plagued by tenants leaving the industry and the building due to tougher than usual economic times.

Just as long as Bingo makes the cut, its happiness all round and in time, the trend may well make it over to Canada too.

Looking for the BEST Bingo games online? Sign up with a top rated site and play!