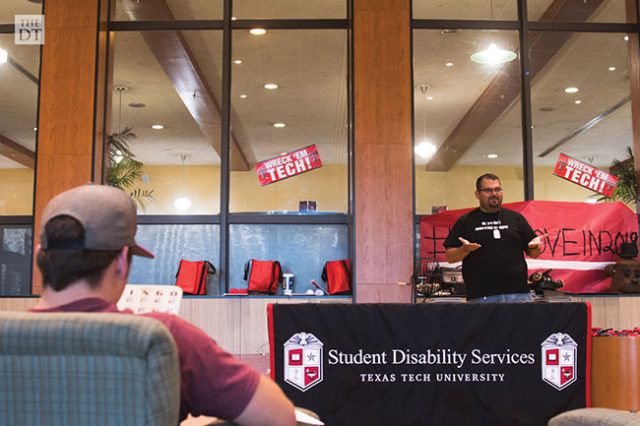 A great time was enjoyed by all when Texas Tech Student Disability Services hosted its much-anticipated Deaf Bingo event last month. The game evening is part of the service’s annual Disability Awareness Week, held to raise awareness of disabled students and of the various services and facilities offered to them.

Having been involved with Student Disability Services since starting at the university, he was also asked to be the guest speaker at the event. Speaking through a sign language interpreter, Hernandez said he enjoyed Deaf Bingo as it gave him an opportunity to challenge participants by signing letters and numbers instead of calling them out vocally. However, he added, as this is his senior year, it was also the last time he would be involved in the event.

Event Good for All

Services administrator Taylor Fidler said the awareness week is relevant to – and benefits – all participants. He said that, from what he had seen, it helped disabled students cultivate a greater sense of identity, as well as enabled them to participate more fully in university life.

Fidler added that it also gave students with disabilities an opportunity to share their culture, experiences, and points of view with participants who are not deaf or are unfamiliar with sign language.

Student adviser and member of the deaf community involvement Silent Raiders club, Madison Lucas said the week gave people a chance to learn how to treat others, and to focus on the ‘ability’ in ‘disability’. The annual week-long event is in keeping with the mission statement of the club to which she has belonged for 3 years.

She said the club hosts informative events about ASL and culture, as well as those that give students a chance to sign in an informal, social setting. While Lucas enjoys all the club’s activities, she said she has a special appreciation of sign language and the culture that has developed around it.

According to the student adviser, the awareness week has the additional benefit of stirring up interest in ASL among the rest of the community. She added that she believes it will eventually lead to greater inclusion of people who are deaf or hard of hearing.

Not Just at Texas Tech

Texas Tech is not the only place in the state where people with disabilities can play Bingo. A faith-based non-profit organisation called Volunteers of America Texas hosts regular game evenings at Heights Manor. The facility offers low-income accommodation for physically and mentally disabled adults.

Shouting out BINGO is the best! Play online and WIN.