State of the Union Bingo A Big Hit 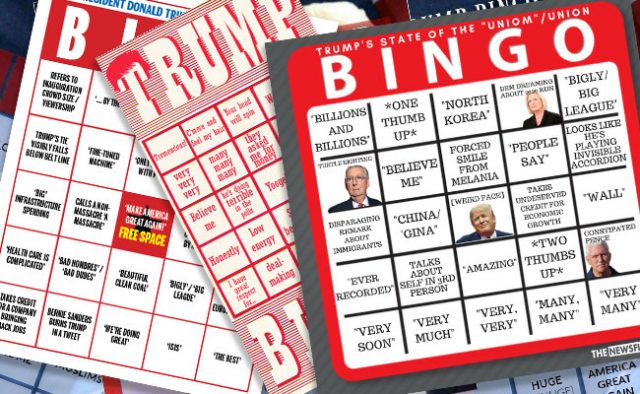 Being a democrat is all about keeping it wholesome whilst keeping your cool. Just ask California Democrat and congressman Mark Takano. Whilst drinking games have become tradition during every State of the Union address, Takano decided to occupy the moral high ground by suggesting that Bingo be played instead.

Taking an obvious swing at US President Donald Trump, Takano recently released his Bingo card suggestion on social media, and tweeted in his usual casual dry style that unfortunately the phrase “I know words, I have the best words” didn’t make the cut this time round.  Takano did go all out on the perceived self-pity often displayed by minority groups and prompted the up and coming players of his new game to be on the high-alert for phrases like “I’m being treated unfairly”. Quite comical, whatever your feelings about immigration and Trump’s many side steps regarding the issue.

We thought it very befitting that finding any mention of caravans also deserves a blot in the relevant box. An image of Trump sipping water from a bottle as well as any reference to how smart he is, also qualifies as a Bingo-credit.

State of the Union Bingo may not turn out to be all that, and perhaps “I know words, I have the best words” should have been allowable after all. For the benefit of those not keen on following all of the latest news on the president-elect, Trump has become quite notorious for throwing about words or sentences of which he quite obviously does not have a clue as to the actual meaning of what he is saying.

The mind’s eye inadvertently conjures up images of a near-sighted trump scuttling about on the ground in search of his glasses and his next nonsensical buzz-phrase. Perhaps someone should start compiling a true-Trump dictionary for the benefit (or at least to provide some comical relief) of future generations.

But Trump aside, the idea of playing Bingo instead of drinking one’s self into a state of blissful oblivion does seem like a morally responsible decision. And with Trump at the helm, a bit of good quality gaming fun may be the perfect antidote to the fact that the new chief in charge has managed to turn the State of the Union address into something that may just as well be referred to as the Nation in a State address.

Whatever type of Bingo you love, you’ll find it online.
Play TODAY and WIN!