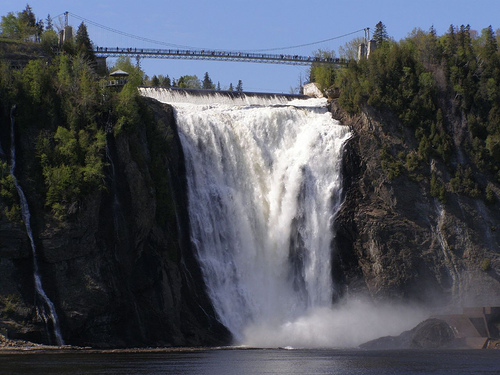 December has been so mild relative to what we normally experience, so my friend and I decided to take a road trip two weeks before Christmas to one of my favourite cities, Quebec City. My friend loves to play online bingo but she agreed to visit one or two bingo centres. Neither of us wanted to make this a bingo centre tour of Quebec! But I wanted to visit a couple of centres on the way. She "wholeheartedly" agreed and off we went.

Small Towns and Back Roads

We also wanted to travel the back roads even though it would take us quite a bit longer to get to Quebec City.

We took the Highway of Heroes until it intersected with Route 2. We got off and headed into Port Hope. We ate Italian food at Trattoria Gusto which is in an old, historic hotel. We shared a bottle of wine at dinner which meant that we wouldn't be able to drive for about an hour. No matter; we just went for a pleasant autumn walk in lovely Port Hope! We found ourselves on Lake Street which is on a very big lake!

Then back to the car, coffee in hand, and onward toward Cobourg. On the outskirts of the metropolis of Cobourg, we stopped at Betty's Pies and Tarts for a world famous butter tart. Then on to the Burnham Family Farm stand where we bought some crisp apples and ate them with our butter tarts!

In Cobourg we went straight to the Breakers On The Lake where we settled into our room. We went to supper at Marca on the Wharf, a concert at 19th century Victoria Hall, and off to exhausted sleep.

There is a wonderful Bingo Centre in Cobourg, Bingo Country, which has many sponsors that together receive hundreds of thousands of dollars each year. The sponsors work with cancer survivors, under-privileged kids, people with cystic fibrosis, domestic violence prevention, and many more good causes.

We spent two leisurely hours there and our “contributions” helped a number of low-budget organisations!

Singing Along with Famous Canadians

The next day we drove through Montreal because we were already anxious to get to Quebec City. From Cobourg to Montreal is a very long drive so we were prepared for many hours in the car with the collected music of famous Canadian singer-songwriters such as Gordon Lightfoot, Joni Mitchel, Gilles Vigneault, Neil Young, Buffy Saint-Marie, Gene MacLellan, and of course Leonard Cohen.

Between singers we managed to talk about our different bingo likes and dislikes. My friend plays online for the convenience and the variety. Like most Canadians, she doesn’t like to travel when the weather is bad, the roads are slick, the usual stay-home excuses. I, on the other hand, prefer the camaraderie of a bingo centre. Online you never experience the many strange but harmless characters you often see at a centre.

My friend also likes to play casino games online. Our discussion led me to a conclusion that I had never thought of before: online bingo players like to gamble online, period. The undeniable convenience of online gambling overrides the advantages of playing at a live centre or casino. Here lies the rub: online players have everything they want at their fingertips; it could never be like that at a live bingo centre or casino.

We stopped in Kingston to rest our legs. We walked for close to an hour on the K&P Trail. Then we ate lunch and walked in the city. There is a company that operates walking tours of Kingston called Haunted Walking Tours. Their tours are usually at night so we walked in Old Kingston as preparation for our anticipated long walks in Old Quebec.

We stayed on Route 2 all the way to Montreal from Kingston. We stopped every 45 minutes or so to stretch and walk a bit. As we got closer to Montreal, we needed to use our French more. That was quite a challenge; we both "speak" French but neither of us actually speaks French! We drove through Montreal. Montreal is a great city. It's beautiful with old Roman Catholic churches, narrow streets, just a wonderful place to visit! But we've both been to Montreal so many times that we felt this trip we would "skip Montreal"! We spent the night in a simple motel east of the city.

We looked for a bingo centre along the way and found one in the eastern area of Montreal. This centre seems to be looking more for players who want razz matazz than players out to have a simple good time and raise some money for good causes. Charitable binmgo in Quebec Province is in a very bad way. Bingo centres are closing at an alarming rate. The centres that are left are looking to the government to help them out financially. I think that every organisation that gets money through charitable bingo must mount a campaign to get people out to play bingo! People truly want to help and always have positive comments after playing bingo for charity. the charities need to get the word out that they need the money bingo brings in!

Hamlets On The Way to Quebec City

Our next stop was Lavaltrie where we walked on the Promenade Desjardins. Lavaltrie is another 17th century French city that has been overtaken by 21st century culinary culture. There are more fast-food restaurants than old country restaurants here, or so it seems. So we decided on a late lunch and just caught a snack in Lavaltrie.

We ate lunch at L'Aubergedu Petillant in Louiseville on the outskirts of Trois-Rivieres. Most of Trois-Rivieres was burned down in a terrible fire in 1908. We went to the museum of the Old Jail but couldn't get a tour of the jail. We've heard that the tours, conducted by old inmates, are an amazing experience. Maybe next time.

We finally arrived in Quebec in the late afternoon. Quebec is one of the oldest cites in North America; it was founded by Samuel de Champlain in 1609. Its charm lies in the fact that it is entirely French in its ways. A very large percentage of the population of roughly 500,000 is strictly French speaking!

Quebec is a very compact city. In this regard it is very similar to Boston the historical area of which can be walked in a short time. We took taxis only when we were a bit far from our hotel at night.

In 1985, UNESCO designated the historical area of Quebec as a World Heritage Site. The earliest settlements in Quebec are today known as Basse-Ville and Haute-Ville meaning lower town and higher town. Basse-Ville was the original commercial area with docks, warehouses, wharves and the like. As was common to North American cities, it fell into disrepair but has been revived and now boasts many small hotels, shops, restaurants, pubs. Nightlife! To the credit of the developers, they didn't tear down buildings. They renovated old buildings and retained the area's charm through narrow cobblestoned streets.

Haute-Ville is in the higher ground so its land is held in place by heavy walls. These walls were supposed to serve as fortifications but the British were able to fire on the district anyway in 1759.

We spent one day on a side trip to the Ile d'Orleans. We covered about 5% of the island. We got as far as the golf club on the southern coast where we were able to walk around the grounds a bit.

For our seven days in Quebec City we went to museums, galleries, walked endlessly in the older parts of the city, struggled to speak French, drank local beer and spirits, heard local artists sing in local pubs, and two bingo sessions at Bingo les Saules which supports many charitable organisations!

We made the drive back home in a single day and had a wonderful Christmas with our families!

Try your hand at Bingo and maybe your lucky numbers could win you a Jackpot!