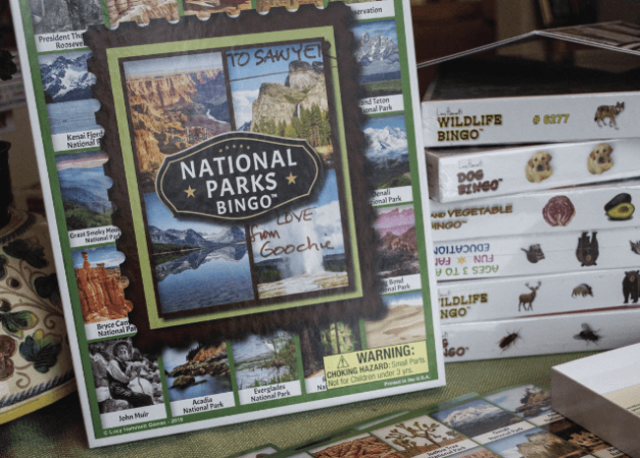 Lucy Hammett’s latest Bingo game pays homage to the Animal Kingdom. National Parks Bingo is already a flying success, in part says Lucy, because animals are out true treasures and wildlife is a best seller, irrespective of the outlet. In this case, that outlet is Bingo.

Lucy Hammett is passionate about being creative and about educating people, and ever since 1982, she has been living her dream by combining those passions with a newly discovered other big love: Bingo. After having come across Loteria Mexicana in the early 80’s, a Bingo game that made use of pictures instead of numbers, Lucy became inspired and created Texas Bingo. Lucy recalls how in those early years, creating a single game spanned an entire year, because all of the cards were drawn by hand.

Name It And Lucy’s Created It

Today, most of Lucy’s games make use of photographs and to date, she’s created a grand total of 34 games. Some of the modern-day versions now being created by the artist still make use of illustrations for that personal touch, an example being Merry Christmas Bingo.

Over the years, Lucy has touched on various topics; adding to the US national heritage as she goes along. The use of photographs, says Lucy, is to avoid the cards from resembling a cartoon-like style, because her games are being sold by the Smithsonian, the Field Museum and various national monuments all throughout the country.

Lucy has over the years touched on every conceivable subject and has even created a game for the White House Historical Society; you guessed it; White House Bingo.

Education Is The True Value Here

Elaborating on the latest to have been added to her collection, namely National Parks Bingo, Lucy explains that the real value lies not on the front of the cards, but on the back. For example, Yellowstone’s card features a geyser on the front (image), and on the back, interesting facts about the Yellowstone Park, such as that its America’s very first national park, and also that its located on a dormant volcano.

Lucy is all about keeping it fresh and making it fun. A prime example is Farm Bingo. The game features all of the usual suspects; chickens and a barn cat count among the stars of the farm-show. But there’s also a scarecrow, just to round of the theme for good measure.

All of Lucy Hammett’s wonderful Bingo creations can be ordered from her website.

Find the Bingo game that suits YOU! Choose from different rooms ONLINE!