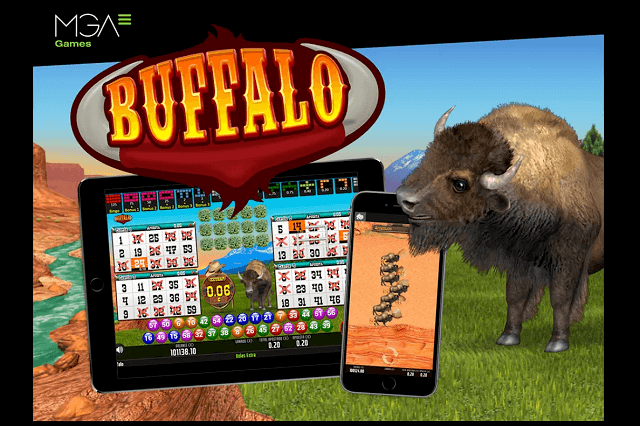 First released in Spain on July 13th, Buffalo Bingo immediately ignited a massive player-response. The developer now confidently hopes to achieve the same success and acclaim on the international front.

The game comprises of a total of 4 digital Bingo player-cards consisting of 15 numbers each. Winning numbers are drawn from a drum containing 60 balls. Of the 60 balls, a total of 30 balls are drawn per online Bingo game session. Players are free to request up to 14 additional (extra) balls over and above their original allotted concession.

The next step is for players to match up to 15 different prize patterns by comparing their allotted numbers to the numbers appearing on the balls that have been automatically drawn by the game. In addition to several cash prizes up for grabs to those players who successfully match the patterns, there is also a Jackpot reward up for grabs by those players successful at nabbing the big Bingo match-up.

There are several different smaller cash prizes up for grabs too. These are won by competing in any one of the 3 additional mini-games associated with Buffalo Bingo. The mini-games are called Trials, Bison Stampede, and Buffalos – each of which offers to players a different cash prize for their reward.

The 3 mini-games add a great deal of excitement and variety to the core-gameplay. The first of the tree, namely the Trails mini-game, requires of the player to lead the bison on the best route in the direction of the prize.

The second, Bison Stampede, offers to the player the opportunity of discovering anywhere between 4 and an incredible 12 new prizes as they make their way along the route.

Last but not least is the Buffalo Bingo’s mini-game. This game is a classic Pick-Me style game where the player must guess the location of the jackpot.

The game is an exciting and fresh new twist on traditional in-person gaming hall Bingo, and once again clearly shows why playing online is such a huge hit. Requiring no physical interaction at all, online Bingo is just about the best and safest way to enjoy a gaming evening indoors.

Not to mention even the chance of winning some awesome cash prizes.

Ready for BINGO? Play online any time and WIN!