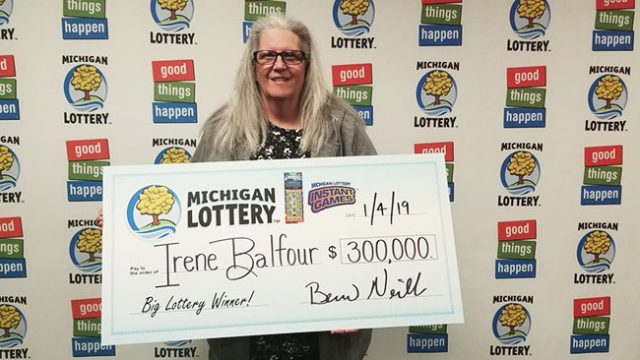 Although bingo is known for delivering some huge wins, most players expect a few hundred dollars in prizes at best when they take a trip to their favorite local halls. However, this is a game that is always full of surprises, so it should not come as a surprise to anyone that it has delivered a win worth hundreds of thousands of bucks to a player in Michigan.

A woman hailing from Ogemaw County over in the US was shocked and overjoyed when she managed to turn a humble bet into a prize worth a whopping $300,000. Irene Balfour, age 63, wagered just $20 when she bought her winning Michigan Lottery Super Bingo ticket at a Shell gas station in West Branch.

Speaking about her luck to officials, Balfour said that she was cashing in her $20 winning ticket, as she had been wanting to play that specific game for a while at the time. She noted that she bought her Super Bingo ticket, and as she was walking to her car, she stumbled upon a quarter that had been dropped on the ground.

Already noticing a pattern of fortune at play in the universe, Irene used that quarter to scratch at her ticket once she had gotten into her vehicle. Needless to say, once she had realized that she had won the windfall of her dreams, that quarter quickly became her lucky coin!

In her winner’s statement, Balfour said that she scratched off the first row on her card, and was happy to see that she had won something for her trouble. However, as she scratched the second row and got another bingo, her heart started to pound as she realized that hers was no ordinary ticket. She then revealed a third win, and then a fourth, at which point she knew that she had clearly hit a fantastic jackpot.

Speaking to her husband, Irene insisted that the pair had to go to Lansing to have the ticket verified right then and there. Her hunch proved to be right, and within no time, the Michigan resident had become the owner of $300,000 in cash – minus tax, of course.

When asked about what she plans to do with her winnings, Balfour has hinted that a new car might be in the pipeline. She is also planning to pay off her mortgage, which will guarantee her peace of mind and plenty of security as her golden years approach.

Ready to WIN big with Bingo?
The best games are waiting for YOU online!