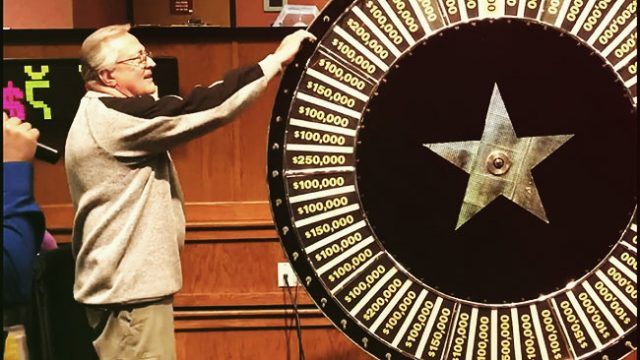 Imagine winning $1 million in a game of Bingo! For a lucky man from Mukwonago, simply known as David H., everyone’s ultimate fantasy recently became a reality when he struck gold on the All Star Bingo Wheel at the Potawatomi Hotel & Casino. The $1 million win is the biggest ever recorded for the game at the casino.

The All Star game adds an interesting twist, and that just as soon as someone wins by having dabbed out all of the required numbers on a selected card, they are given the chance to spin Bingo’s wheel of fortune. David was guaranteed a sum of at least $100,000, as this is the smallest win on the wheel. But Lady Luck had other plans for the player from Mukwonago. Little did David H. know that he was about to join the millionaire’s club.

What makes the win even more exhilarating, is that the object of the game is to cover all 5 points of the star in a 5-part game. But simply covering all 5 isn’t enough; players have to do so in 48 numbers or fewer.

And what did David H. do? He covered the last point on the 5th star with the 48th number that was called that day. Now if that isn’t an argument in favor of our destinies being written in the stars! Not much is known about just how the lucky player plans to spend his new fortune, but we’re quite certain that he has some very specific ideas in mind for his million.

What happened to David highlights just how much Bingo has evolved. It’s no longer just another numbers game played exclusively by the old and the lonely on a dreary Saturday afternoon. Thanks to the relentless efforts by developers and casino entertainment venues alike, everyone now wants a piece of the pie.

Exciting elements have been incorporated, with the wheel of fortune concept being but one of many others. A social element has been introduced in many versions of online Bingo that is available on the Internet today. Players are incentivized to engage with one another, and as a result, even the social element of the typical Bingo hall is now available to anyone with a connection to the World Wide Web.

As for David, we’re convinced that he’s quite chuffed at having left the comfort of his home on that particular night. Now that’s what we call a million-dollar trip.

Are YOU ready to get rich? Play casino games online and try your luck!