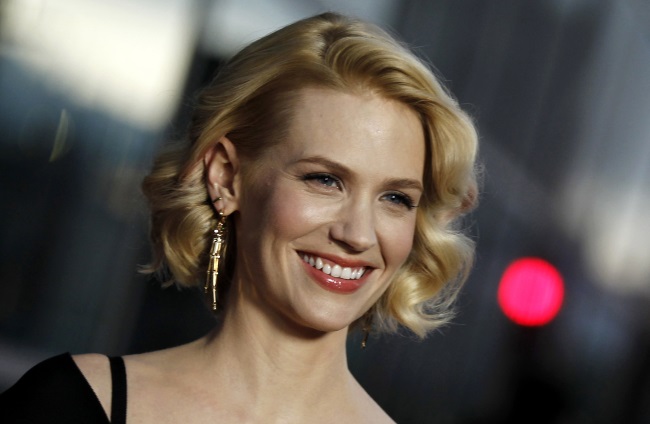 Not only is American actress January Jones the face and persona of popular series Mad Men’s Betty Draper, but she’s also a self-professed fan of Bingo. Playing Bingo while drinking wine, in a church basement to be exact. Jones recently appeared on the Jimmy Kimmel show (Jimmy Kimmel Live) and revealed what the perfect stage for her recent birthday party would have been; a stage she had in fact tried to pull off before having settled on staying home and watching this year’s Golden Globe Awards on the telly instead.

Jones related to host Jimmy the story of how she had wanted to host a Bingo party (Jones apparently loves Bingo parties) in the basement of a church (or some other “legitimate” venue; legitimate to the mind of the 42-year-old actress at least) but that her plans had been thwarted by the fact that she was unable to find clergy willing to allow a booze-themed Bingo party “in the basement”.

As to why Jones had so badly wanted to host a booze-themed Bingo party in celebration of her having turned 42 this January 5th, the popular actress explained that it was really fun and easy to play, as opposed to it all “sounding like work”, which pretty much turned out to be the case as far as finding a suitable (or rather willing!) venue went. At the risk of sounding old, said Jones, she eventually decided to call the whole thing off and watch the Globes and the playoffs at home with friends instead.

There may not have been a Bingo party, but the actress did reveal that she this year received some pretty amazing birthday gifts, with the best of these having been gifted to her by none other than comedy king and actor Jim Carrey. The funny-man had apparently gifted Jones a signed autograph by Unsolved Mysteries host Robert Stack. As to why this marked the perfect gift for Jones, she explained by telling the story of how she had near-worshipped Stack growing up. So much so that she had always dreamt of being Stack.

Jones also elaborated some about playing Mad Men character Betty Draper, saying that Draper’s mental instability proved someone of a theme all throughout her own career. Mental instability aside, when all else fails, at least we now know how January Jones feels about Bingo. And really; let that be enough.