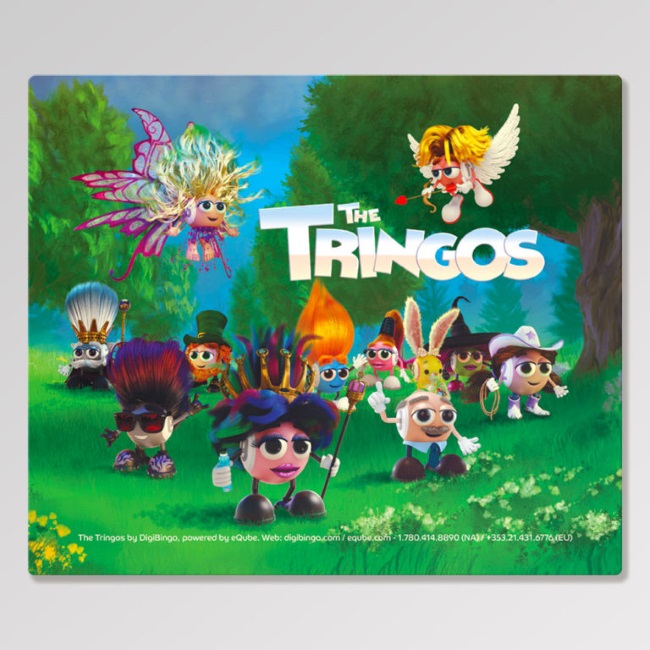 Meet the Tringos! A community of characters who are no larger than a standard Bingo ball. But the Tringos do more than merely lap up the sweet tropical sun on the sandy white beaches of Bingoland because they also happen to be part of a community of unique characters created by leading Canadian Bingo systems provider eQube.

Headquartered in Edmonton Alberta, eQube is a top global manufacturer of all things related to the world’s favourite numbers game, including eBingo systems utilised by commercial and charitable land-based venues across Canada as well as Ireland. As for project Tringos, the idea is to pretty much enhance eQube’s current Bingo offerings by adding a cast of characters; each with his or her own storyline; to the game and thereby hopefully ad a brand-new dimension to the game.

eQube has confirmed a company by the name of Dab-O-Ink as being one of its initial partners working on the new endeavour. Dab-O-Ink is a leading and prominent manufacturer of high-quality Bingo “markers” and its scope of business spans the globe. Dab-O-Ink’s involvement will comprise of a total of 4 Tringo characters, with a separate character etched onto one of each of 4-dabber set of markers.

The initial set to be released by Dab-O-Ink will be available for a limited time only. Four more Tringos-markers will be released on a quarterly basis and this will prevail until such time as what all of the characters in the collectable series have been rolled out. These too, will only be available for a limited time and so getting in early is key.

According to the official Tringos introductory statement issued by eQube, the aim of the company has always been to innovate and to invigorate Bingo. It believes that by adding a family of Tringos characters to its brand of games and offerings, it will add an exciting new world of play to its existing portfolio.

If any one games provider is capable of really making a success of any endeavour, then that provider is without a doubt eQube. The company does after all enjoy a majority market share in Canada’s regulated Bingo industry and is therefor perfectly poised to reach new heights as a result of this exciting new product.

eQube has been around and doing its thing in a stellar way ever since 1999 when it first entered the market as a big-time Bingo player.