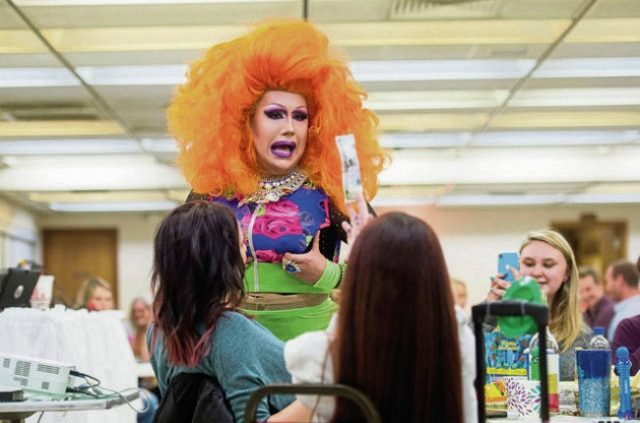 Its true: everything is prettier in drag. Even Bingo. Just ask the hundreds of fans and players who regularly support Miss Thea Trix, the eloquent star of Miss Thea’s Drag Queen Bingo. Drag queen Bingo has at its heart a selection of charities that are especially deserving of help, if ever there was such a thing. Last year alone, Bingo’s special queens raised help to the tune of $500,000 in support of animal rescue, Relay for Life and various people in dire need of life-saving surgery.

It’s all about glitter and glam and sheer style and it takes form at the Monessen Fire Department Social Hall, on behalf of the Monessen Rostraver Rotary Club. There’s make-up, there’s jewellery and there’s wonderfully wacky wigs. Oh, and not to mention panty-hose stockings stuffed with all sorts of padding to create the perfect curve!

No Room For Hate

One thing that is blissfully absent, according to Miss Thea Trix, a.k.a. 44-year old Fayette County native Jason Zubovic, is judgement. In and amidst all of the glorious style, there isn’t any room for any of that.

It’s a routine that’s worked since the very first show back in 2016. Miss Thea Trix steps out into the crowd, this time round to the beat of Kelly Clarkson’s “Heartbeat Song”, and asks, “Who’s here for Bingo and who’s here for the drag queens?”. The response is always the same, chuckles Zubovic, the crowd has come to see Bingo’s famous drag queens!

Zubovic tells the story of how he was first introduced to the concept of drag whilst studying at university. A student at the time at Duquesne University, Zubovic was invited by a girlfriend to visit a bar that went by the name of Pegasus. Miss Thea remembers having made a remark after the show at the bar that all of the girls had been simply fabulous, to which his girlfriend at the time had obviously responded that though fabulous, “girls” was far from it.

And that, recalls Zubovic, was how it all started. Various books on hair and make-up followed, and before anyone was any the wiser, out popped the newly created star of her own Bingo drag queen show, the daringly extravagant Miss Thea Trix.

But, says the former Newell resident, Miss Thea Trix was by no means Bingo’s very first drag queen ever. She was preceded by a pair named Rick Allison and Alan Jones who launched OUTrageous Bingo! In 1998 in an effort to raise funds for an AIDS Community Centre, as well as an Equality Community Centre (in Pittsburgh).

Did anyone say Bingo with a capital G fr Glam?

Ready for loads of fun AND big wins? Enjoy online Bingo at its best NOW!