Cow Chip Bingo’s Lucy Not In The Play Mood 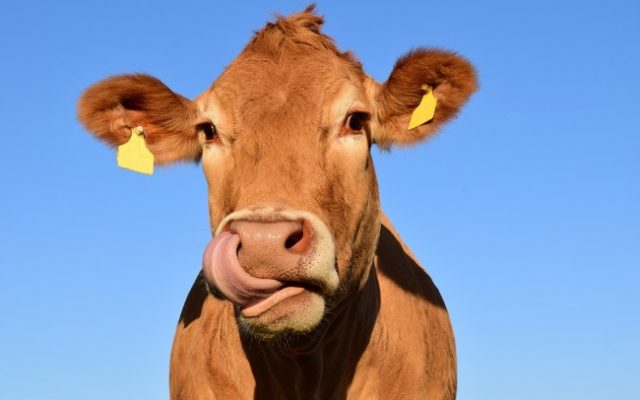 Cow Chip Bingo is a thing. Just ask the residents of Warner. It is after all the highlight of the annual Warner Cow Chip Day, and involves a cow pooping on a numbered or lettered grid fashioned into a patch of grass. Tickets are sold beforehand and he or she who holds the lucky poop number wins Bingo.

This year’s event was however something of a disappointment to local Cow Chip Bingo contestants, and not least of all Weatherford resident Ingrid Law, who had driven the nearly 3 hours’ journey between Weatherford and Warner for the sole purpose of watching Lucy the heifer do her lucky thing on the grid.

Which of course she (Lucy, that is) did not.

Law said that she had first learnt of the existence of Cow Chip Bingo earlier on this year in January after having been informed of the activity by a group of guys at a robotics event. At first, she found it hard to believe that such a thing even existed, but of course Google confirmed it all to be perfectly dinkum and legit.

Law promptly purchased eight tickets to the lucky poop-by-numbers event and hung around with friends whilst waiting on Lucy to “perform”. But it wasn’t to be and the heifer, supposedly not hard pressed enough to allow nature to take its course in the spirit of love and charity, was allowed to leave and go home after an hour’s worth of trudging about aimlessly and no Bingo poop in sight.

Event organisers eventually made peace with the fact that they would have to simply draw the lucky number instead.

As to what had been up (or not) with Lucy can only be speculated about. But owner Josh Stretch has a pretty good idea. Stretch is of the opinion that Lucy had been fed too soon and simply did not have any lucky poop to spare by the time she was eventually led onto the grassy Bingo patch. Lucy was after all an experienced Cow Chip Bingo “caller” having done the honours during 10 previous Bingo events.

According to chamber VP Paula Girty, a good number of tickets had been sold to the event. She said that many people did not stick about for the actual poop-show and merely purchased tickets for a possible win. The tickets all have phone numbers on them and winners not present at the actual event are notified of a win by telephone call, confirmed the VP.

Play Bingo online and be a WINNER! Play 24/7 at TOP sites.