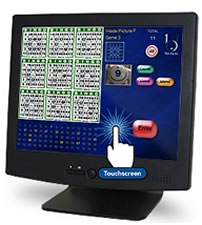 I've been away for two weeks but now I'm back. Since I started this blog I've spoken almost exclusively about playing bingo at bingo centres. This was because my overall focus is on charitable bingo. But, as I said in my first blog, I also enjoy playing bingo online. It's convenient and if I want just a few games or just don't want to get dressed and go out, online bingo is a great alternative way to play.

I'm not going to plug any single online bingo sit but I would like to talk about what I look for in a site in order decide to deposit money and play there.

This is the first and the foremost aspect of online bingo or online gaming in general. You have to rely on the site to keep your money safe and to be impregnable to prying eyes. I don't want my identity known so I have to trust the site to keep my identity secret. To give players confidence to divulge personal information and to deposit money, every site is encrypted.

Every online gaming site brags that it is encrypted in the most state-of-the-art system known to man. However, state-of-the-art encryption is merely a starting point when deciding to deposit at a site. There are a few very standard methods of making payments online. These methods, which I won't name because I'm not plugging anyone but which should be obvious in any case, have their own very strict requirements for the "merchant" before the merchant would be allowed to use their payment methods. Playing at a site that is on good terms with the leading online payment methods is an absolute must.

There are gambling blogs where people talk about their positive and negative experiences in depositing and especially in withdrawing money. Every online site, be it a full-fledged casino that also offers bingo, or a dedicated bingo site, allows you to deposit instantaneously once you've filled out the required forms and been approved. Withdrawing all too often is another story. Some sites have a one-week or even a two-week waiting period before they will release your money. If you went to the bank in your neighborhood and asked to withdraw money and they said you'd have to wait a week or more, you'd either change banks immediately or run for the hills because an economic apocalypse was at hand! Online gaming sites seem to think that you don't really want to take your money out. As a general rule, I play only at bingo sites that allow speedy withdrawal.

When you sign up to play bingo online, you will be offered a bonus just for filling out the form and making your first deposit. The bonus is good a far as it goes. The money is not big but it's helpful. However, you won't be able to withdraw money until you've gambled a minimum amount. I totally understand why this is so; otherwise people would sign up, take their bonus, withdraw it, and leave. The rules for this play through requirement vary from site to site so don't sign up at any site that has a play through requirement that you think is extreme and unreasonable. It's very easy to simply walk away online. Click and you're gone!

Because of the essence of computers it's possible to have a tiered level of winnings for the same bingo game. People who play x dollars can win a certain amount and if you play more than x you can win more. I understand it intellectually but I always insist on understanding it on paper. If the explanation the site gives for its tiered system is unclear, click and you're gone.

Online gambling sites are regulated and accredited. Here we are interested in accreditation. I always want to know that the site cannot in any way affect the outcome of any ball that comes up in a game. To this end, I want to read that the Random Number Generator (RNG) has been examined recently and was in perfect running order. The RNG controls every number called in online bingo. At a bingo centre, you want to know that the air that is blowing the balls around is totally legitimate; that the number caller has no possible way to manipulate the number called. At an online site the situation is the same except that the RNG replaces the wind tossed transparent globe of balls.

Anyone familiar with online gaming is familiar with this concept. At a gambling site with large jackpots, a 95% RTP rate may be a bit misleading. The 95% is certainly correct but because of the bonus, fewer players share in the prizes. At a bingo site, the jackpots and game winnings are much smaller even with tiered winnings. So a 95% RTP rate means that while you are likely to lose money in the long run, the amount you lose will be minimalâ€”entertainment money at its best. But a bingo site with a low RTP rate is probably manipulating something. Click and you're gone.

Every bingo site should have a Loyalty Club where the pamper you based on how many points you've acquired. You get points for playing. A good Loyalty Club will be user-friendly; some Loyalty Clubs have such stringent requirements that they are for all practical purposes, useless. Try to play at a bingo site with a player-friendly Loyalty Club.

I've exhausted my space limit for now. I'll resume this discussion next time.