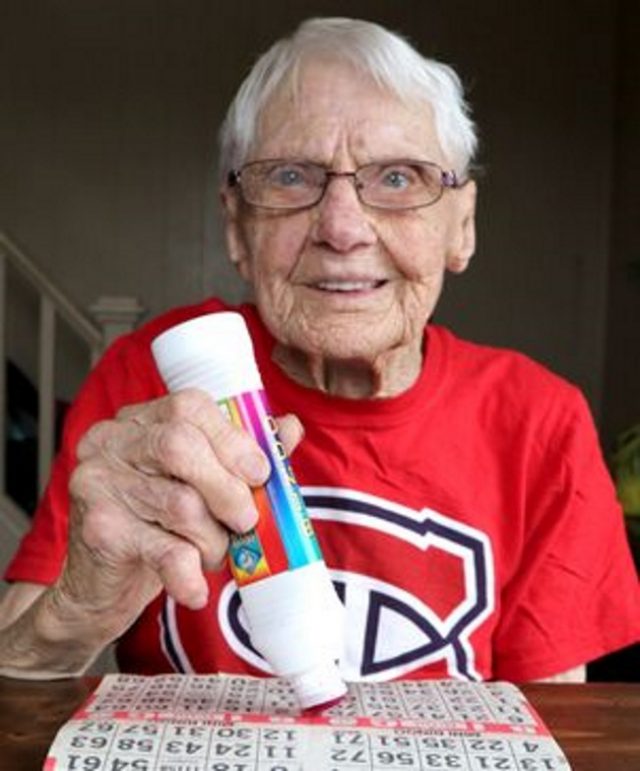 Age is just a number and continuing to do what you love the most seems to be a sure-fire recipe for longevity. Just ask Rosie Guzzo, a soon-to-turn 100 years old mother of 10 and resident of Sault Ste. Marie. Rosie turns a century old this coming Friday and being a keen Bingo player, has chosen to celebrate her birthday by dabbing away at the cards.

Rosie and about two-dozen guests, comprising of family as well as friends, will on Friday convene at the Garden River Bingo hall in order to celebrate Rosie’s 100th birthday. There will most likely be birthday cake, but what Rosie looks forward to most of all, is her lucky pair of Las Vegas dice, and dabbing away at the cards in the company of her loved ones.

As Regular As A Birthday

But Rosie hasn’t always been a fan of Bingo. She tells the story of how at 16, she had started to accompany her mother to Bingo games. She remembers how she would much rather have preferred to skipping or playing Baseball.

But the bug bit and Rosie ended up accompanying her mother on regular occasions. Very soon, says Rosie, she wanted to go and did not want to miss out on even single games evening. The outside world soon forgotten, Rosie became a regular player.

Over the years, Rosie has been a regular player at many of Sault’s halls, including those managed by the Catholic churches of St. Veronica and St. Ignatius. Rosie’s biggest win over the years has been a $1,500 score won in Garden River.

To Rosie, every game is an event worth celebrating. She says that she regularly attends Bingo games, and as many as 2 or 3 nights in a week. To her, it’s the opportunity to get out of the house and continue to enjoy her life, even far into her golden years. According to Rosie, she enjoys baking special treats to take along on Bingo nights. The treats are shared with everyone and anyone. Rosie stresses the fact it makes no difference who it is; everyone is invited to partake in her feast.

Rosie played darts for many years, and has now taken to knitting anything from dishtowels to socks. But Bingo, says Rosie, remains her ultimate favourite pastime and the perfect way to celebrate turning a century old.

Which happens to be just another ordinary day, if the tongue-in-cheek Rosie is to be believed.

Enjoy Bingo online at your leisure! Play for a BIG WIN whenever you please.