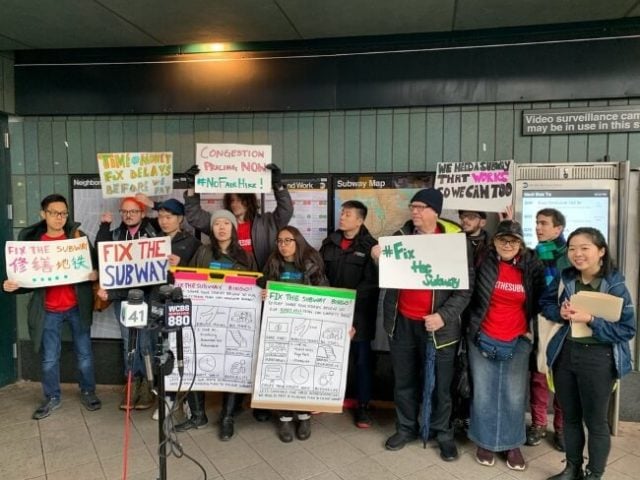 Bingo has been instrumental in fighting for many a social cause, but a group of Queens players who also happen to be daily commuters reliant on public transport in Jackson Heights may very well be the first to have expressed their frustration with a poor train service with the help of the classic numbers game.

#FixTheSubway BINGO, played by a group of transit activists known as Riders Alliance, and on March 10th, sought to raise awareness about the area’s poor public transport system, as well as offer an opportunity for disheartened commuters to tell their stories. Some of the issues highlighted by the game included the overcrowded Q33 bus, which is often the cause of commuters having to call in a no-show at work, as well as the F train’s poor track record in terms of reliability.

A variety of issues experienced with the lacking transport system constituted the items on the Bingo boards, and these were on display-and-play across the various routes. A losing game would be a very befitting description this time round.

Read More…New GO Station To Be Funded By Gaming Group

Ramos: Funds Must Be Allocated

According to State Senator Jessica Ramos, the region’s subways are in a state of complete disrepair, and in desperate need of an urgent intervention. Ramos said that it was vital that a congested pricing plan be included in the 2019 budget, so that the necessary funds needed to improve and repair the stations and subways may be locked into place for allocation.

Ramos said that the long-term commitment to the cause on the part of Riders Alliance was admirable and that she would do everything in her power to ensure that the much-needed fund were allocated.

A Voice To The Mute

According to Yunqiwao Yang, a member of Riders Alliance, there are many people who are suffering as a direct result of the unreliable nature of the subway system. Yang recalls how once, the F train had been all of 15 minutes behind schedule, causing many commuters to be late for work on that particular day. And according to the aggrieved commuter, this was in no way an isolated incident.

Yang also spoke of how those affected by the poor system felt as if they really had no voice with which to bring about change, and they were completely at the mercy of a failing system. #FixTheSubway BINGO, says Yang, finally provided a platform from which to raise their concerns.

Have fun AND win big playing Bingo online. Join in the fun TODAY!