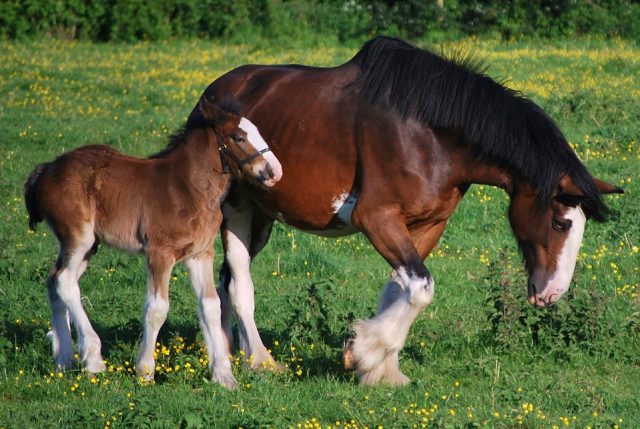 Although it looks very like a normal Bingo game, what’s been unfolding at the Brothertown Indian Nation hall every Monday night is so much more. Tim Wiskow, the owner of the Whisper Hill Clydesdales Therapy Farm in Fond du Lac County, Wisconsin, recently saw a downturn in his financials. After falling very ill in 2017, he was forced to slow down operations, which then resulted in him falling behind in paying his bills. This lead to the very real possibility that the farm might eventually close down completely.

After he shared his story, however, he found overwhelming support from members of his community and things are finally looking up. And he has Bingo to thank for it!

Ever since Wiskow was knee-high to a grasshopper he dreamed of owning horses. He made sure this dream came true when he reached adulthood, and over the past 15 years he’s definitely broadened his horizons. He’s gone on to assemble a herd of animals made up of Clydesdales, donkeys, goats, llamas, miniature horses, ponies, and sheep, and so the not-for-profit Whisper Hill Clydesdales Farm came to be.

Wiksow is able to pursue his passion for working with people with special needs, including veterans, seniors, and children with his animals, and he travels all over to do his good work. He and his pack visit hospitals, nursing homes, and special events to offer animal-assisted therapy to anyone who may need it. When he realised that he may be in jeopardy of losing not only his farm, but his beloved animals too, he realised he needed to take drastic action, and the idea of a Bingo fundraiser was born. After all, the game has been used to rise funds for charitable endeavours for years, so why not for Whisper Hill Clydesdales Farm too?

The Call Was Answered

Sue Reich, one of the volunteers at Whisper Hill Clydesdales Farm, spoke of her delight when people first started arriving at the hall. She said that when arrived to attend the first Bingo game, they were greeted by people who’d gone so far as to save tables for friends, and that early arrivals soon filled up the space more than adequately.

Reich spoke of the good effect working at the farm has had on her. She said that she’d gone through some challenging times at home and at work, and going out to spend time with the animals really restored her and allowed her to move forward more easily.

In order for Wiskow to continue doing his work, the community will need to raise roughly US$30 000 by the end of 2019. The good news is that they’re already roughly one-third of the way there, and the man benefiting from all this goodwill says he’s very optimistic that they’ll reach their goal, especially now he has Bingo on his side.

Be the BIGGEST BINGO winner online! Play to WIN now.