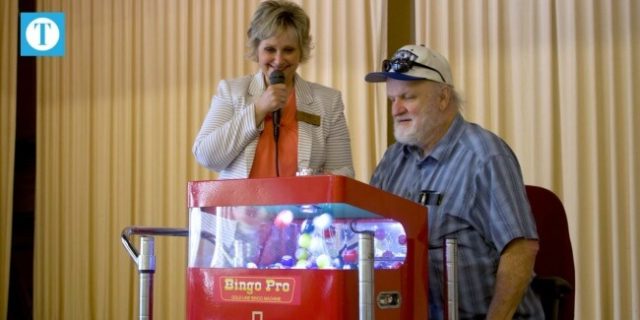 To many people; especially those facing the many challenges associated with being of a senior age, Bingo is so much more than just another game; it’s a way of life offering relief in the way of companionship, meeting new like-minded friends and in some cases even a means to a livelihood. Of all the worthy causes served by Bingo halls and initiatives, serving the aged is probably the game’s most significant contribution across the board.

Just ask management and regulars at the Senior Community Center of Owensboro-Daviess County, as they have a very special story to tell about the saving grace of Bingo and the kindness of humanity.

More Than Just A Game

Executive Director Dana Peveler tells the heart-warming story about the importance of Wednesday-night Bingo at the center for the aged. The seniors residing at the center itself, as well as many living in the surrounding areas, do not merely rely on the once-a-week entertainment as a means of socialising; they even rely on the night for the provision of some much-needed everyday necessities. According to Peveler, 50 cents is all it takes to get you in on a game. Money generated by ticket-sales is then used to purchase everything from snacks to meals to toiletries and cleaning aids. These items are on the list of prizes due to the seniors having specifically requested the items by name.

The items are selected mainly to fill a need, and in some cases even a want, i.e. items that are nice to haves but cannot be afforded in general, for example paper plates; an item taken for granted by most people. To senior citizens, this becomes a luxury item, and thanks to Bingo-night, they too are able to enjoy something considered by them to be special.

But a little while ago, difficulty struck as the existing machine appeared to have given up the ghost. According to the center’s previous director, Robyn Mattingly, the machine was bought second hand more than 15 years ago. At the time of having been purchased by the center, it had already been in use for a number of years. Upon learning of the broken machine and the looming interruption of Wednesday-night games, regular attendee Joyce Sargent took up the challenge and decided to inform others of the need for a new machine on social media platform Facebook.

Much to Joyce Sargent’s surprise, help was at hand in a matter of only 15 hours.

Cathy Campbell, who had previously worked at the center for more than 20 years and still served advisory council, saw Sargent’s plea for help on Facebook. Campbell tells her own special story of how she used to drive her mother to the center for several years to play Bingo. Campbell’s mother was already 91 at the time, and to the 91-year old, it wasn’t just something to do to pass the time; she waited patiently for Wednesdays to come around so that she could head off to play. It was her life and something that brought joy to her golden years.

And so it was decided that in order to honour her mother’s memory, Campbell would make sure that a new machine would be bought. A very special gesture in honour of someone who truly loved Bingo.

Live it up with ONLINE BINGO! Big wins and hours of fun are waiting for you.