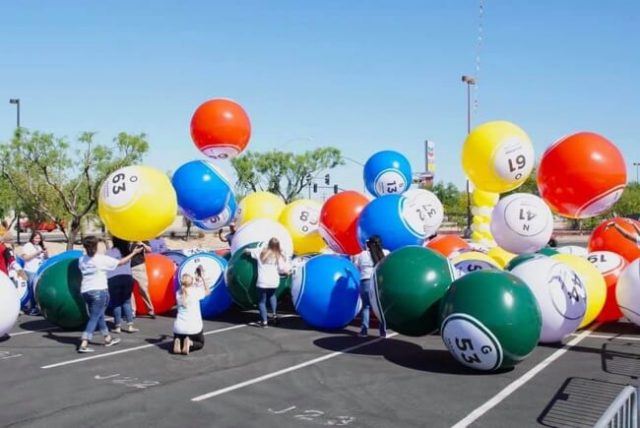 When Gila River Hotels & Casino announced earlier this year in March that it planned to smash not one, but two Guinness world records by staging literally the biggest game of Bingo; including the biggest card as well as the biggest balls ever put into actual play; there was much excitement and anticipation about the casino’s plans for its 25-year anniversary celebrations. And so it came to be that last week the casino managed to do exactly what it had set out to do thanks to 75 balls measuring 4 feet each and a larger-than-life 20-square-feet card.

200 Bingo players were invited to play along and according to the casino’s Chief Marketing Officer, Dominic Orozco, more than anything else, the celebrations were intended to be a fun and momentous occasion for the people and partners who had over the years contributed to the group’s gigantic success.

Orozco closed off by saying that it was a huge honour to bring two Guinness world records to Arizona, and that this had in itself been a true reason for celebration. The giant-size game was hosted by Gila’sLone Butte casino.

But why Bingo? According to Kenneth Manuel, Chief Executive Officer of Gila River Hotels and Casinos, it would be hard to come up with a more befitting way to celebrate the location’s 25-year anniversary milestone than by commemorating and celebrating the very game that the casino is best known for. Manuel said that blowing up Bingo to super-sized proportions is the ultimate way of celebrating the unique milestone in the casino and entertainment business.

Bingo is on all counts an inseparable of the casino’s day-to-day schedule as far as gaming entertainment goes, and this has been so ever since the venue first opened for business all of 25 years ago. What’s more, the casino hosts daily games, as well as B.A.D (Bingo After Dark) themed parties on weekends. Neon lights, a live music DJ and exciting prizes are all part of Gila’s weekend gaming experience.

The winner of the largest game of Bingo ever played, having been afforded the choice of a selection of prizes, opted in on the grand prize of free vouchers to the value of $2,500; and redeemable at the Gila Lone Butte casino.